The Faith vs. Science Mentality

While there certainly are arenas in which the interaction between faith and science may be difficult to parse out, those experiences of tension certainly don't mean science must be rejected as a matter of faith.

By Kelli B. Trujillo


If you were to listen to the views espoused by some of today's foremost "new atheists," you'd quickly draw a conclusion: We humans don't need religion, faith, or "God" any more. Science has answered(or is answering or someday will answer) our questions. Faith—akin to belief in a made-up fairy tale—has no place in a life of honest, logical scientific inquiry.

And if you were to listen to the views perpetuated by some Christians, you'd quickly draw another conclusion: we Christians ought not trust science or its conclusions or, for that matter, most scientists. The Bible, rather than science, answers our questions. Wherever they appear to be in conflict, faith trumps science every time. Science—which is just secular humanism in disguise, after all—has no place in a life of true, devoted Christian faith.

But is this really the case? Are faith and science mutually exclusive—archenemies, locked in a centuries-long battle for truth? Ought people of faith stay away from the sciences and view scientific findings with suspicion (at best) or utter disbelief (at worst)?

Email ThisBlogThis!Share to TwitterShare to FacebookShare to Pinterest
Labels: Kelli B. Trujillo

How Far Can We Go With Science?


What a Wonderful World
How science leads us toward -not away from -our Creator
By Dr. Christa Koval with Amy Simpson

You are fearfully and wonderfully made! With more than 100 known elements in the universe, you are made of only 4. Your body is 96 percent oxygen, carbon, hydrogen, and nitrogen. And most other organisms share these elements with us. Isn't it amazing that such complexity and variety exist among living things as the result of combining only four elements in different ways?

Our bodies are just one mind-blowing element of God's impressive creation, all of which points directly to our Creator and teaches us about him. Hundreds of years of scientific discovery have revealed astounding depths of knowledge about our world, and yet in many ways we're still only just beginning to explore. Scientific exploration draws us toward a deeper appreciation of the unfathomable being who could create so much complexity—it moves us toward a deeper sense of awe and worship.

Consider plant life, for example. Plants use three of the elements found in our own bodies (oxygen, carbon, and hydrogen), plus the energy of sunlight to produce larger compounds. This process of photosynthesis is complicated and understanding it earned Melvin Calvin a Nobel Prize in 1961. But it wasn't until 1988, after 27 long years of additional research, that scientists understood the structure of RuBisCO, the enzyme required to initiate photosynthesis and the most abundant protein on earth (plants produce about 40 million tons per year). RuBisCO consists of a mind-boggling 37,792 atoms put together in a three-dimensional structure that will function only if every atom is in position. Our existence depends on this delicate balance.

Posted by Alice C. Linsley at 7:23 PM No comments:

Our Big God and a Crisis of Faith 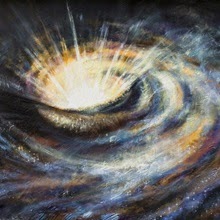 Several years ago I had a crisis of faith. It all began with a Science Channel television program on supermassive black holes, of all things. Basically the premise was that scientists have discovered giant black holes (like the size of an entire solar system) in the center of every galaxy, and each plays an important role in the creation and sustainability of its particular galaxy.

The scientists described the extreme order of these black holes in the whole universal space-time continuum and how it’s forced them to rethink physics. The narrator, summing up several scientists, said, “If, as it now seems, every single galaxy has a black hole at its heart, this can’t be a coincidence.”

You got that right, I thought. It’s called—we’ve got a supermassive, supergenius Creator at work in the universe.