The Nile is the world's longest river. It extends 4,180 miles in East Africa. The direction of the current is north.The prevailing winds move toward the south. This made navigation of the Nile very difficult. The peoples who lived there thousands of years ago discovered a way to use the wind to move their boats up and down the river. Do you know what they used?

The Nile is the "Father of African Rivers" because it flows through and has tributaries in Burundi, the Democratic Republic of the Congo, Egypt, Ethiopia, Kenya, Rwanda, South Sudan, Sudan, Tanzania, and Uganda.

Three principal water ways form the Nile. They are the Blue Nile, the Atbara, and the White Nile. The Blue Nile flows south from Lake Tana and then west across Ethiopia and northwest into Sudan. 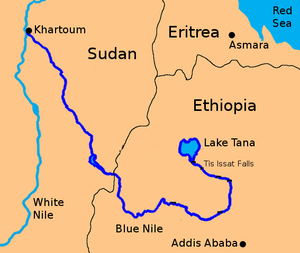 The Atbara flows from the Ethiopian Highlands.The White Nile receives its flow from Lake Victoria and Lake Albert. 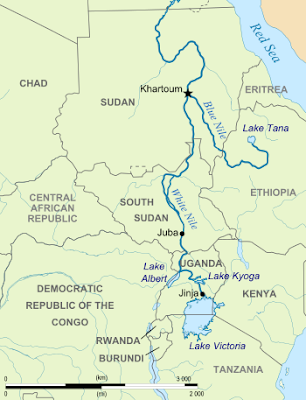 There are two main rivers that flow into the Nile: the Ruvyironza, which emerges in Bururi Province, and the Nyabarongo, which flows from Nyungwe Forest in Rwanda. These two feeder rivers meet near Rusumo Falls on the Rwanda-Tanzania border.

Some of the oldest human settlements were along the Nile and the sources of the Nile in the Ethiopian Highlands, and along the Lakes that feed the White Nile.

Email ThisBlogThis!Share to TwitterShare to FacebookShare to Pinterest
Labels: The Nile