The World Map Without Distortions 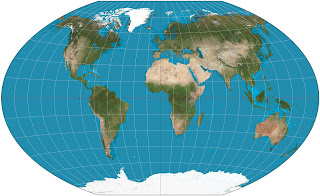 The maps we have become accustomed to are based on a map first produced in the 1600s. These maps are not accurate in their representations of the comparative square miles of the different regions. For example, Europe is shown as being larger in size than South America. Yet Europe is 3.8 million square miles whereas South America is 6.9 Square miles.

Watch this video to see what the map of the world should look like.

Related:  Why the Maps You See Are Wrong; Renaissance Mapmaker Was a Mastermind and a Copycat; How Globes Were Made in the 1950s; A Brief History of Globe Making