I became acquainted with Chris Templar in October 2016 when I attended her fun and informative workshop on robotics in Winston-Salem, North Carolina. Templar Ph.D., is one of the leading technology and robotics professors in the United States. She has been teaching for more than 35 years at Johnson University in Knoxville, Tennessee. The School of Education was named the Templar School of Education in honor of Dr. Templar. She was instrumental in the design and delivery of Johnson’s undergraduate and graduate teacher education programs; preparing the University for four state visits for Tennessee State approval of the teacher education programs; the design of the Chinese studies program, and taking the Master of Arts in Educational Technology project to Zhengzhou, China.

Dr. Templar's distinguished career continues through her recent appointment as director of international teacher education and director of educational technology, focusing her efforts on Johnson graduate students from The People’s Republic of China.

Alice Linsley: When did you realize that you wanted to serve Jesus Christ?

Dr. Templar: I became a Christian when I was 7 years old and was baptized at 13. I knew for as long as I can remember that I wanted to be a missionary to the Chinese.

Tell me about your childhood in England. What experiences shaped you and your later interests?

I grew up in a Christian home in England with very supportive parents. My parents were very committed to missions and brought me up to look up to missionaries as the Lord’s servants who were special people. When I was four to six years old the communists took over China and all the missionaries had to leave. I grew up in England and various China missionaries mainly from OMF and the BMS came to stay in my home. They were very shell shocked and weary. I did not understand this as a small child but I did understand that they loved China. One of them showed me a tiny shoe which she said a grown up lady wore.

At this very young age I learned to love China. I collected autographs of these people and most of them wrote a Bible verse in Chinese in my album. It was a very impressionable mark in my life. As I grew older I loved science and engineering, played with building kits and remember how much I wanted a chemistry set but that was a “boy’s” toy as was an erector set - called Meccano in England. I remember drilling holes in my dollhouse to wire it with electric lights. I was soundly punished this was just after the world war and toys were passed down from relatives as they were hard to find. I thought dolls were silly much to my mother’s dismay who felt she needed to develop the nurturing side in me. But I took the dolls I received to pieces to see how they worked! I remember receiving a new doll and taking it to pieces after I had been warned that I must not break it. So from an early stage I was certainly drawn to science and math. Today I would be a STEM child. I went to a British state school until 11 when I won a scholarship to a British public school. ( A high quality private school) This was a girls school and the headmistress wanted to help us see that girls could do things just as much as boys. She was years ahead of her time. I was placed in the math and physics stream and took O and A levels in these areas. But I decided I wanted to be a missionary and wanted to study Theology. This was very much opposed by my headmistress. But I landed up going to Leeds University to study Theology.

Who else influenced your life and future direction?

When I was in Leeds I met the person who was most influential in my life apart from my parents. Dr Verna Wright was a professor and head of the medical school at Leeds University. Verna was a dynamic Christian who believed in evangelism and also believed in mentoring students to see how to become dedicated to the Lord. Until he died he wrote me at least two or three letters a year prayed for me and helped me not only in Leeds but in so many different ways. From Leeds I moved to London University and completed my BA and M.Div and my Graduate Teaching certificate (the equivalent of teacher licensure). By then I had applied to OMF to become a missionary. The mission board insisted that I work at teaching for a year so that I had experience before going overseas. During the OMF training I met many China veterans and my love for the Chinese only developed. I did the Wycliffe Bible Translators summer linguistics program and learned Thai for a week but during that time I heard not one tone. So my results came with a recommendation that I not be sent to a tonal area and definitely not learn Chinese. OMF did some other testing at the University of London and each time the response came back that I could hear no tones and should not learn a tonal language. This appeared to close the door to that world. OMF and I decided that I would go to Indonesia. But wonder of wonders I was sponsored by a Chinese church who spoke Indonesian. They wanted me to teach in their seminary. I learned the language and spent four years there. I came to America for my furlough and worked on a M.A. and a Ph.D.

When the time came back I was unable to return to Indonesia and landed up with an invitation to Johnson University –then Johnson Bible College where they asked me to develop a teacher education program. On my second visit to JBC the Dean of Students said he had something special at his house and maybe I would like to see it. This was 1978 and he had the first model I TRS-870 that came to Knoxville. Five minutes playing with that computer and I was hook. I saw so much potential for computers with children and have played with computer and robots and other things ever since. As a result of this we taught the first required course for computers for teachers in Tennessee, and finally developed an accredited program at the masters and ed specialist level in educational technology. Gradually I have worked more on more on ed tech until now I do that all the time.

What do you love about your present work? What project has you excited?

I am also very interested in the integration of Bible in the STEM environment.

What inspires you to try new things?

I just love trying everything new that comes along. Having two advanced degrees in ed tech I have to make sure that my department keeps up with the developments in the field. This means that I will always be trying new things.

Tell me about the naming of the Templar School of Education in your honor.

Johnson University honored me by naming the school of education the Templar School of Education after the work the Lord had enabled me to do in the founding and developing of the educational program.

Perhaps another great reward comes from the success of your students?

I have no children of my own, but I have many graduates’ children around the world who call me granny. All I do is done for the Lord and to glorify Him. I try to mentor my students just as Verna Wright mentored me. 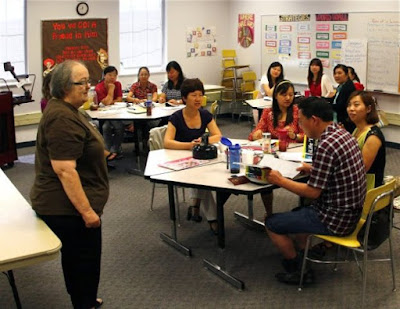 How did you become involved with robots?

In 1981 I first went to MIT for the LOGO conference sponsored by Papert. In the discussion at the end of the conference they were identifying groups that were not represented at the conference. A Jewish gentleman stood up and said one other group not represented was the religious minority. Papert said that if ever they presented a proposal it would be considered. On the plane on the way home I drafted a proposal for a study of the book of Philippians and the visits Paul made to Philippi in Acts to be worked by 4-6th grade students in LOGO and drama.

The proposal I submitted was accepted and the following year I showed a video in which the faculty and staff children on our campus presented the results of their study and work. It was watched by a professor from Toyama University in Japan who stopped me on the sidewalk after the session and invited me to come to his university and present the material, which I subsequently did. This work with LOGO was my early experience of coding and fine arts combined with young children.

Computer education moved away from the creative discovery approach to the use of computers with children favored by Seymour Papert and others, becoming much more structured. But the pendulum has swung back to the more creative discovery approach. I have run pilot programs and graduate classes with various robots for children, taught cad software (Tinkercad) to children as young as 3rd grade, and worked with them as they have seen the success of their 3D printed objects.

I also have worked with professors from Anhui Normal University in China to help them develop makerspace and robotic courses for their masters programs in educational technology.  I have found that the opportunities to share with teachers both in America and China have expanded exponentially. After fifteen trips to China to teach in the area of educational technology and robotics I am settling down to teach the Chinese who come to me. One of my graduates is following in my footsteps and going to China to teach this summer.

While I have worked for the majority of my professional life in some aspect of technology it has always been my desire to integrate the Lord, His Word, and His ways into the work I am doing.  I have never found this hard to do. The things we use in educational technology were created by the Lord, and in all things I seek to give glory to Him.