Trees of the Bible

The Bible contains a great deal of information about trees and tree symbolism. In Psalm 1:3 we read that the person who delights in the Lord is "is like a tree planted by streams of water, which yields its fruit in season and whose leaf does not wither-- whatever they do prospers."

In Genesis 3:3 we read about the Tree of Life that grew in the middle of the garden. The idea inspired C.S. Lewis. The Tree of Life appears in different forms in Lewis'd tales; sometimes as an apple tree and sometimes as a lantern. Lewis places the tree and lantern "in the midst of the garden" (Gen. 3:3) or in the midst of the wood. Here Lewis builds on a detail in Genesis which places the Cross or Tree of Life at the sacred center of the cosmos. The tree and lantern in the Narnian wood are symbols of the Jesus Messiah, who comes from another place (heaven) and gives light to the world. The Church Fathers regarded the Tree of Life in the midst of the garden to be a symbol of the Cross upon which Jesus Christ died to give life to the world. Peter declared to the Jews gathered for Passover, "The God of our fathers raised up Jesus, whom you had killed by hanging Him on a tree." (Acts 5:30)

The Tree of Life is very old motif as is evident from its wide diffusion across Africa, Asia, Australia and South America. In Anthropology, the principle of diffusion states that the oldest culture traits, beliefs, or practices are those that are most widely diffused globally.

In Genesis we read how the serpent tempted Eve to eat the forbidden fruit from the tree of the knowledge of good and evil. In ancient images the serpent is often appears with a tree, as in the image below. 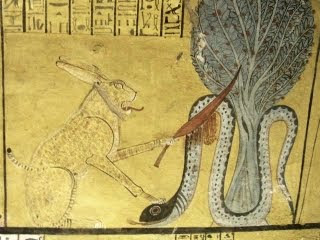 Ra's cat killing Apophis at the tree of life.

The trees known to have grown in the region of Abraham’s ancestors include acacia, cedar, date nut palms, sycamore fig trees and baobab. Let's consider the significance of each of these. 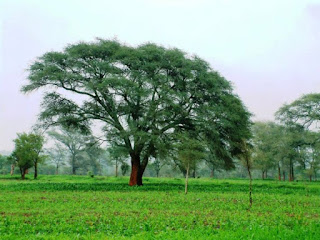 An acacia tree in East Africa

Acacia (Hebrew: sittah; Egyptian: sunt) and cedar (Hebrew: 'erez; Egyptian 'arz) were used in the construction the Tabernacle and later in the construction of the Temple built by Solomon. Both trees are drought resistant and fragrant. Acacias grow into spreading shrubs and thorny trees with clusters of fragrant, yellow-orange puffball flowers that attract bees. Cedar is in the pine family and once grew in abundance in the mountains of Lebanon. The sea-faring Egyptians used cedar to build their ships and they used cedar oil in embalming the dead.


Women prophets, like Deborah, sat under the date nut palms and people came to them for wise counsel. Judges 4:4-6 tells us, “Deborah, the wife of Lappidoth, was a prophet who was judging Israel at that time. She would sit under the Palm of Deborah, between Ramah and Bethel in the hill country of Ephraim, and the Israelites would go to her for judgment."

Some scholars believe that the fruit eaten by Eve in Eden came from Sycamore Fig tree (Ficus sycomorus). In many works of art the fruit is shown as an apple. An older tradition maintains that the fruit was a fig growing on the Sycamore figs trees which grew near the rivers in the region of Eden. This tradition is also represented in paintings by the fig leaves covering Adam and Eve's private parts.

Range of the Ficus sycomorus

The Syacmore fig is a large edible fruit which ranges from green to yellow or red when ripe. In its natural habitat, the tree can bear fruit year round, peaking from July to December. Jesus “cursed” the Sycamore Fig tree when it failed to produce fruit. In Mark 11:12-14, we read:


The next day as they were leaving Bethany, Jesus was hungry. Seeing in the distance a fig tree in leaf, he went to find out if it had any fruit. When he reached it, he found nothing but leaves, because it was not the season for figs. Then he said to the tree, “May no one ever eat fruit from you again.” And his disciples heard him say it.


The baobab tree was an important tree for Abraham's people. It looks as if it grows with its roots up (see image below). This story surrounding the baobab warns against never being content:


﻿﻿The baobab was among the first trees to appear on the land. Next came the slender, graceful palm tree. When the baobab saw the palm tree, it cried out that it wanted to be taller. Then the beautiful flame tree appeared with its red flower and the baobab was envious for flower blossoms. When the baobab saw the magnificent fig tree, it prayed for fruit as well. The gods became angry with the tree and pulled it up by its roots, then replanted it upside down to keep it quiet.


﻿In the wet months the baobab stores water in its thick, corky, fire-resistant trunk for the long dry period ahead. The water is tapped when drinking water becomes scarce in the dry months. 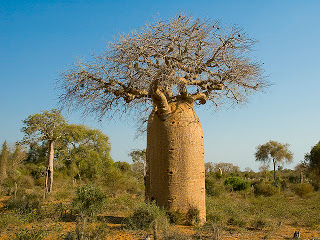 The bark of the baobab tree is used for cloth and rope, and the leaves are prepared as condiments and medicines. The baobab’s fruit is called "monkey bread." This tree has a spongy bark because it retains water which desert nomads are able to extract by slicing the bark. In the Sahara and in the arid parts of the Arabia this tree sustains life. The motif of water flowing from a tree is found across the ancient world and is associated with the Tree of Life. This idea of waters flowing from a tree is found in Revelation 22:1-2. 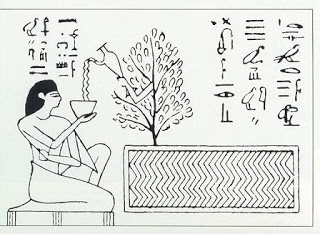 Egyptian image of water flowing from a tree. 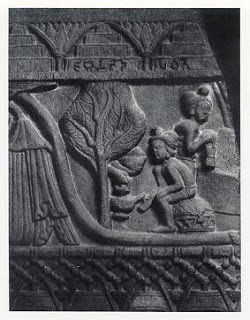 This image of water flowing from a tree is found in India.

Related reading: Trees in Genesis; Antarctica Once Had Baobab Trees; The Fig Tree in Biblical Symbolism; Theories About the Tree of Life; The Tree of Weeping; Cedars of the Lord; Trees of the Prophets; What Happened to the Cedars of Lebanon?