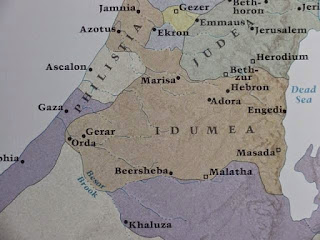 Hebron and Beersheba (where Keturah lived) are in Idumea (Edom).

The Horite Hebrew rulers of Edom are listed in Genesis 36. Abraham's territory was entirely in the region of Edom. It extended on a north-south axis between Hebron and Beersheba and on an east-west axis between Engedi and Gerar. This region was called Idumea by the Greeks which means "land of red people."

One of the rulers of Edom was Seir the Horite. He was a contemporary of Esau the Elder. He married Adah. Esau the Younger is described as red and hairy. He married Oholibamah.

People often were buried under oaks and terebinths (Gen. 35:8; I Chronicles 10:12). This helped to ensure that the boundaries were observed since people stayed away from burial grounds, fearing the spirits of the dead.

Related reading: Edom and the Horites; Trees of the Bible; The Trees of Prophets; What Happened to the Cedars of Lebanon?