The Trees of Prophets

In the Old Testament we find that trees are associated with wise counselors known as morehs, prophets, or judges. The word "Torah" means instruction and is associated with a prophet or a seer sitting under a tree. These trees were important landmarks.

Women prophets, like Deborah, sat under the date nut palms and male prophets sat under oak trees. In Judges 4:4-6 we read that “Deborah, the wife of Lappidoth, was a prophet who was judging Israel at that time. She would sit under the Palm of Deborah, between Ramah and Bethel in the hill country of Ephraim, and the Israelites would go to her for judgment." 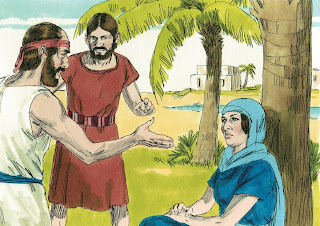 Deborah's duties included settling disputes, instructing leaders, providing guidance to people, and rallying the people to defend themselves in battle. According to Judges 4 and 5 the people of Israel had peace for forty years under Deborah’s rule.


Deborah judged from her palm tree (tamar) between Bethel and Ramah, on a north-south axis. Deborah's tree was between two important shrines. It marked the "sacred center" between Ramah to the south and Bethel to the north. Ramah means high or lifted up, and Bethel means house of God.

Abraham pitched his tent at the “Oak of Moreh” (Gen. 13), between Ai to the east and Bethel to the west. The Oak of Moreh, or the Oak of the Seer, is described as “the navel of the earth” in Judges 9:37. Here we find a parallel to Deborah's palm tree at the sacred center. The oak was an important landmark near Shechem where Abraham camped after he arrived in Canaan. It is likely that he went there seeking divine guidance. Sacred oaks were known elsewhere, according to Deuteronomy 11:30.

Ramah was Samuel's hometown. The elders of Israel came to Ramah to demand that Samuel appoint a king to rule over them. David fled to Ramah for Samuel's help when Saul was pursuing him to take his life. Ramah and Bethel were important shrine cities long before the time of David. As Samuel's father was a Horite Hebrew priest, we might assume that Ramah was a Horite Hebrew shrine city.

Deborah's tree was at the center of a north-south axis between Ramah and Bethel. The oak where Abraham camped was at the center of a east-west axis between Ai and Bethel. It appears that among the ancient Hebrew, the date nut palm (tamar) and the the north-south axis were associated with the feminine while the oak and the east-west axis of the solar arc were associated with the masculine.The pillar-like oak resembled the male reproductive organ and represented masculine virtues. The open nut of the tamar resembled the female reproductive organ and represented feminine virtues.


Related reading: Samuel's Horite Family; The Judges Deborah, Samuel and Huldah; Trees of the Bible; Trees As Boundary Markers; What Happened to the Cedars of Lebanon?