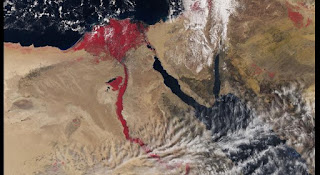 In Exodus, God commanded Moses to “stretch out thine hand upon the waters of Egypt … that they may become blood.” The water was contaminated and the Egyptians were dependent upon the Nile for their drinking water. What might have caused the contamination? Why did the Nile appear to flow with blood rather than water?

A satellite photo from the European Space Agency suggests an explanation for the event described in Exodus. The red color is vegetation that borders the banks. As the waters flow into the Mediterranean, the red color fans out across the Nile delta.


Sentinel-3A's Surface Temperature Radiometer measures the energy that radiates from the surface of Earth. The heat that emanates from the Nile vegetation is expressed in the infrared spectrum. This results in the crimson color.

This does not explain how the Nile could turn to blood. Some believe God used a natural phenomena that turned the Nile waters red. Some possibilities include volcanism, rifting, dust storms and algae.

Volcanic eruptions can cause sediments to flow into nearby rivers. Sediments that are rich in iron and hematite can turn the water a red color.


The gray areas are interconnected water systems. The black line shows the rift that extends across central Africa. The blue body of water on the right is the Nile River.

Under certain weather conditions algae can grow that turns the water red. This has been observed as water systems in different parts of the world. This video shows how an algae bloom turned the water at beaches in Australia. Patches of the red algae were sighted between Bondi Beach and Maroubra Beach.

Dust storms can carry and deposit red dust in the water. This too can cause the water to appear red. Scientists have observed large clouds of dust coming from Saudi Arabia towards Egypt and Sudan. This photograph, taken on 10 May 2011, shows a large dust cloud moving toward the Nile from Saudi Arabia. 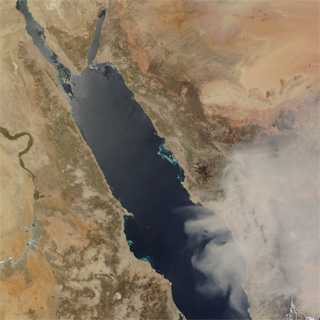 The Nile is the longest river in the world, extending for about 4163 miles (6700 kilometers) from its headwaters in the Ethiopian highlands to the Mediterranean. The Nile is one of the few rivers on Earth with a current hat flows northward. The prevailing winds, on the other hand, blow southward. On some days the opposing forces can be almost equal.

Email ThisBlogThis!Share to TwitterShare to FacebookShare to Pinterest
Labels: Nile