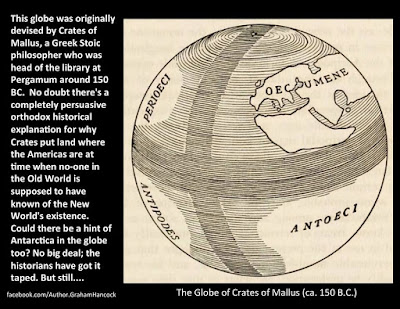 
Many peoples have shown interest in the earth and the relationship of continents and territories, including the Egyptians, Babylonians, Greeks and Romans. The Stoic philosopher, Crates of Mallus, fabricated a globe around the year 150 BC. Crates' globe is very interesting because he speculated that there must be a land mass where North America is located. He thought this must be so because he believed that the earth's balance required symmetry. In other words, the part of the world that he knew about required the existence of a counterpart on the other side of the globe. 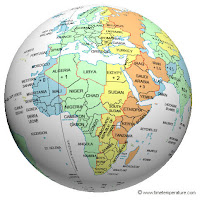 The oldest surviving terrestrial globe was made in 1492 by the German mapmaker Martin Behaim (1459–1537). He had the globe painted by Georg Glockendon. Behaim's globe is known as the Nürnberg Terrestrial Globe or the Erdapfel (German - "earth apple").

The year 1492 was an important year in Western history. Columbus discovered the West Indies, and King Fernando and Queen Isabela united Spain for the first time. Soon after, Spain began to explore the Americas and founded colonial cities in Mexico, Cuba, Puerto Rico, Florida, and South America.

Behaim's depiction of the world was not inaccurate, especially in relation to the west coast of Africa and North America, about which he knew nothing. His globe is in the collection of the German National Museum in Nürnberg.

Related reading: A Brief History of Globe Making: Urbano Monte: Renaissance Map Maker; Why The Maps You See Are Wrong