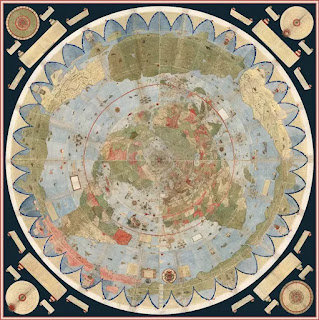 Urbano Monte (1544-1613) was an Italian nobleman who lived in Milan. He produced the map shown above. He copied many of the images from earlier map makers, but he also innovated. In a treatise he wrote for his followers, Monte apologized for his poor drawing skills.


When he was 41, Monte took up cartography and created this world map, replete with mythical creatures, including sea monsters, unicorns and centaurs. Three editions of this map survive today — one at Stanford and two in Italy.

An intensive examination of the Stanford map revealed that Monte was quite the imitator, copying mythical monsters from other world maps, Van Duzer said. For instance, Monte copied an odd-looking turtle bird, a sea monster and a scroll from a map published nearly 30 years earlier by the Italian Michele Tramezzino.

Monte implemented some unorthodox practices. Namely, he left instructions that the 60-page map be arranged like a giant poster and rotated around a pivot point as a 2D disc. Also, he drew the map from the perspective of a bird's-eye view of the North Pole.


Related reading: Why the Maps You See Are Wrong; How Globes Were Made in the 1950s; A Brief History of Globe Making