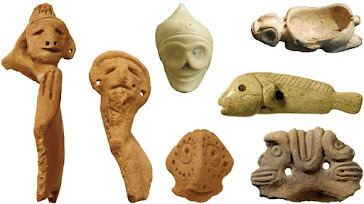 These pieces reveal a range of styles and date to around 1200 A.D.
(Corinne Hofman and Menno Hoogland / Florida Museum of Natural History)

New DNA studies have clarified migrations to islands of the Caribbean, but also raise additional questions. One question is why the European explorers of those island believed the native population to be much higher than the studies indicate?

This report on a technique developed by Harald Ringbauer, a postdoctoral fellow in the Reich Lab, explains that shared segments of DNA were used to estimate past population size, and showed that only about 10,000 to 50,000 people were living on two of the largest islands, Hispaniola and Puerto Rico, shortly before European arrival.

"While the heat and humidity of the tropics can quickly break down organic matter, the human body contains a lockbox of genetic material: a small, unusually dense part of the bone protecting the inner ear. Primarily using this structure, researchers extracted and analyzed DNA from 174 people who lived in the Caribbean and Venezuela between 400 and 3,100 years ago, combining the data with 89 previously sequenced individuals.

The team, which includes Caribbean-based scholars, received permission to carry out the genetic analysis from local governments and cultural institutions that acted as caretakers for the human remains. The authors also engaged representatives of Caribbean Indigenous communities in a discussion of their findings.

The genetic evidence offers new insights into the peopling of the Caribbean. The islands' first inhabitants, a group of stone tool-users, boated to Cuba about 6,000 years ago, gradually expanding eastward to other islands during the region's Archaic Age. Where they came from remains unclear -- while they are more closely related to Central and South Americans than to North Americans, their genetics do not match any particular Indigenous group."

The new study suggests the Caribeean islands were first populations by two waves. A group of migrants almost totally replaced the islands’ original population. Only 3 of the individuals sampled showed ancestry of two distinct populations.
Dr. William F. Keegan, whose work in the Caribbean spans more than 40 years, contributed to the study. He is curator at the Florida Museum of Natural History and co-senior author of the study. "The methods David's team developed helped address questions I didn't even know we could address."
The Arawak-speakers who arrived on these islands from northeast South America introduced ceramics about 2500 years ago.

"During the Ceramic Age, Caribbean pottery underwent at least five marked shifts in style over 2,000 years. Ornate red pottery decorated with white painted designs gave way to simple, buff-colored vessels, while other pots were punctuated with tiny dots and incisions or bore sculpted animal faces that likely doubled as handles. Some archaeologists pointed to these transitions as evidence for new migrations to the islands. But DNA tells a different story, suggesting all of the styles were developed by descendants of the people who arrived in the Caribbean 2,500-3,000 years ago, though they may have interacted with and took inspiration from outsiders.

"That was a question we might not have known to ask had we not had an archaeological expert on our team," said co-first author Kendra Sirak, a postdoctoral fellow in the Reich Lab. "We document this remarkable genetic continuity across changes in ceramic style. We talk about 'pots vs. people,' and to our knowledge, it's just pots."