Are Women More Sensitive to Bias?

It is popularly assumed that women are sensitive to social cues and nuance. People speak of "women's intuition" and indeed there is evidence that the female brain is hardwired to pick up on seemingly inconsequential data that men often miss.

This study of same-sex and heterosexual couples revealed that women and men were equally sensitive to interpersonal relations, but "mixed-sex dyads were more sensitive than same-sex dyads." This suggests that the natural gender relationship of male-female partners does involve greater sensitivity on the part of the female partner.

Feminists would have us believe that this is due to "the subordinate status of women in Western society."  Feminist scholarship, writes Jane D. Schaberg in her Biblical Views column for the November/December issue of Biblical Archaeology Review, aims to turn the old, male-dominated understanding of the Bible on its head and thereby reveal new insights into the lives of often-marginalized women in the ancient world.

Feminist readings of the Bible do not necessarily aim for complete objectivity, which Schaberg calls an "impossible ideal," but they show that women largely focus on issues that have been sidelined in biblical studies, like slavery, gender inequality, and sexual abuse. In other words, it appears that women are more sensitive to issues that pertain to injustice.

That said, Feminisim offers an unsatisfying explanation for the subordination of women. The Bible offers a more interesting and satisfying answer. It tells us the the equal dignity of men and women, which was the Creators' intention from the beginning, was lost when humans first experience fear, sin and death. Feminists argue that patriarchy is the result of universal oppression of women, but the Bible says that the woman chose to subordinate herself to the man when she became fearful. The effects of fear on men and women are different, as Harvard psychology professor Carol Gilligan showed in her seminal work In a Different Voice.

Feminists argue that patriarchy is the result of universal and systemic oppression of women. They want to make men the oppressors and ignore the effects of fear on males and females. In the biblical worldview patriarchy is the result of fear (Gen. 3:10) entering the male-female relationship. Because of fear, the woman's desire is for her husband and he "rules" over her. (Gen. 3:16)

As an anthropologist and a Christian, I have pioneered for more than 30 years a new field of science - Biblical Anthropology. Having lived abroad in different cultures and having traveled extensively since I was a young child, I am extremely sensitive to cultural differences and I naturally compare and contrast features of the different cultures I have experienced and studied. I am sensitive to cultural nuances and I explore these in my research. Many of the features I have identified in my work are distinctively African or have an origin in Africa.

It should be noted that both men and women respond positively to my research. The only opposition I have encountered has been from men in the American Scientific Affiliation who ignore anthropologically significant data or filter out the African cultural context of some biblical material. Alan Dicken told me at the ASA conference in Nashville that my research into Abraham's Nilotic ancestors was wrong and without substance. Asked if he had read any of 1800 articles on Biblical Anthropology, he admitted that he had not. Another ASA member Dick Fischer wrote to me: "Every one I know recognizes a Mesopotamian flood. Nobody puts the flood in Africa. Alice, you at least have to recognize the basics before you venture into speculative territory."

All of the men in the American Scientific Affiliation who have written on Genesis place Noah and Abraham in a Mesopotamian context, so the picture of Noah as a Proto-Saharan ruler and Abraham as a Kushite Habiru/Hebrew is bound to trouble them. They have criticized my research, but have not been able to refute it. I am not being overly sensitive to their criticism, but I acknowledge their bias as a fact.


Related Reading: Are Feminists Correct About the Church?; The Paradox of Feminism; Blood and Gender Distinctions; The Question of Patriarchy; The Bible as the Woman's Story; Re-thinking Biblical Equality; Adam According to Mesopotamian Tradition; Adam was a Red Man; The Age of the Earth and Evidence of Human Occupation; Gender Bias in Academic Philosophy


A Quaker, astrophysicist Jocelyn Bell Burnell (1943-) discussed her religious history and beliefs in an interview with Baroness Joan Bakewell in 2006. Dame Jocelyn has been an active Quaker since her school days at the Mount School in York, a Quaker girls' boarding school.


Bell Burnell was a doctoral student at Cambridge University when she discovered the first pulsars. The rapidly spinning neutron stars are formed in supernova explosions. 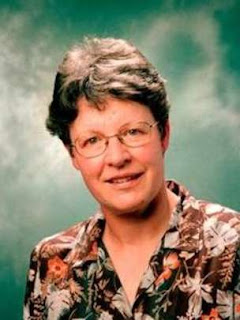 Jocelyn’s discovery of radio pulsars was described by Iosif Shklovsky as “the greatest astronomical discovery of the 20th century” and for this discovery, her thesis supervisor  Antony Hewish, and his colleague Martin Ryle were awarded the 1974 Nobel Prize in Physics. Burnell was completely omitted as a co-recipient, to the outrage of many prominent astronomers at the time. However, Burnell has since received many awards and honors.

In March 2013 Dame Jocelyn was elected Pro-Chancellor of the University of Dublin.

Posted by Alice C. Linsley at 4:18 PM No comments: