The twin prime conjecture is all about how and when prime numbers — numbers that are divisible only by themselves and 1 — appear on the number line. "Twin primes" are primes that are two steps apart from each other on that line: 3 and 5, 5 and 7, 29 and 31, 137 and 139, and so on. The twin prime conjecture states that there are infinitely many twin primes, and that you'll keep encountering them no matter how far down the number line you go. It also states that there are infinitely many prime pairs with every other possible gap between them (prime pairs that are four steps apart, eight steps apart, 200,000 steps apart, etc.). Mathematicians are pretty sure this is true. It sure seems like it's true. And if it weren't true, it would mean that prime numbers aren't as random as everyone thought, which would mess up lots of ideas about how numbers work in general. But no one's ever been able to prove it.

It's all about the polynomials...

Email ThisBlogThis!Share to TwitterShare to FacebookShare to Pinterest
Labels: Mathematics 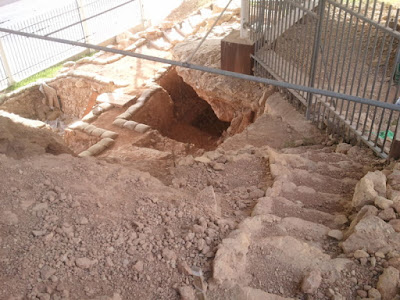 Tel Aviv University researchers, in collaboration with scholars from Spain, have uncovered evidence of the storage and delayed consumption of animal bone marrow at Qesem Cave near Tel Aviv, the site of many major discoveries from the late Lower Paleolithic period some 400,000 years ago.

The research provides direct evidence that early Paleolithic people saved animal bones for up to nine weeks before feasting on them inside Qesem Cave.

The study, which was published in the October 9 issue of Science Advances, was led by Dr. Ruth Blasco of TAU's Department of Archaeology and Ancient Near Eastern Civilizations and Centro Nacional de Investigación Sobre la Evolución Humana (CENIEH) and her TAU colleagues Prof. Ran Barkai and Prof. Avi Gopher. It was conducted in collaboration with Profs. Jordi Rosell and Maite Arilla of Universitat Rovira i Virgili (URV) and Institut Català de Paleoecologia Humana i Evolució Social (IPHES); Prof. Antoni Margalida of University of Lleida, University of Bern, and the Institute for Game and Wildlife Research (IREC); and Prof. Daniel Villalba of University of Lleida.

Posted by Alice C. Linsley at 8:09 AM No comments: 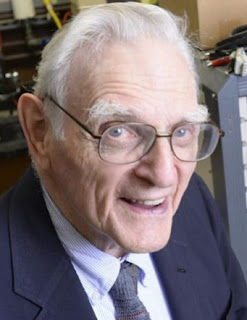 
Israel’s Prime Minister Benjamin Netanyahu and Israel’s Science, Technology and Space Minister Yaakov Peri have selected John B. Goodenough, professor at The University of Texas at Austin and inventor of the lithium-ion battery, to share The Eric and Sheila Samson Prime Minister’s Prize for Innovation in Alternative Fuels for Transportation.

The Samson Prize, totaling $1 million, is the world’s largest monetary prize awarded in the field of alternative fuels and is granted to scientists who have made critical advancements. Goodenough plans to donate his prize money to UT Austin to thank the university for helping to support his research lab.

Goodenough, who serves as the Virginia H. Cockrell Centennial Chair of Engineering in the Cockrell School of Engineering at UT Austin, will share the prize with Jay Keasling, professor in the College of Chemistry at the University of California, Berkeley. Netanyahu announced the winners Oct. 7.

John Goodenough was one of three recipients of the 2019 Nobel Prize in Chemistry.

Posted by Alice C. Linsley at 4:40 AM No comments: 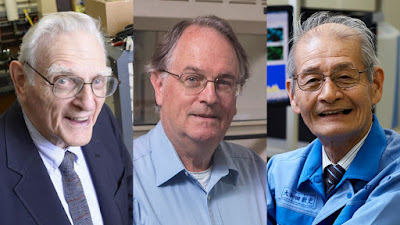 Three scientists (from left) John B. Goodenough, M. Stanley Whittingham, and Akira Yoshino have won the 2019 Nobel Prize in chemistry for their work on lithium-ion batteries.


John B. Goodenough
The University of Texas at Austin, USA

Lithium-ion batteries have revolutionised our lives since they first entered the market in 1991. They have laid the foundation of a wireless, fossil fuel-free society, and are of the greatest benefit to humankind.

The foundation of the lithium-ion battery was laid during the oil crisis in the 1970s. Stanley Whittingham worked on developing methods that could lead to fossil fuel-free energy technologies. He started to research superconductors and discovered an extremely energy-rich material, which he used to create an innovative cathode in a lithium battery. This was made from titanium disulphide which, at a molecular level, has spaces that can house – intercalate – lithium ions.

The battery’s anode was partially made from metallic lithium, which has a strong drive to release electrons. This resulted in a battery that literally had great potential, just over two volts. However, metallic lithium is reactive and the battery was too explosive to be viable.

John Goodenough predicted that the cathode would have even greater potential if it was made using a metal oxide instead of a metal sulphide. After a systematic search, in 1980 he demonstrated that cobalt oxide with intercalated lithium ions can produce as much as four volts. This was an important breakthrough and would lead to much more powerful batteries.

With Goodenough’s cathode as a basis, Akira Yoshino created the first commercially viable lithium-ion battery in 1985. Rather than using reactive lithium in the anode, he used petroleum coke, a carbon material that, like the cathode’s cobalt oxide, can intercalate lithium ions.

The result was a lightweight battery that could be charged hundreds of times before its performance deteriorated. The advantage of lithium-ion batteries is that they are not based upon chemical reactions that break down the electrodes, but upon lithium ions flowing back and forth between the anode and cathode.

Posted by Alice C. Linsley at 9:30 AM No comments: 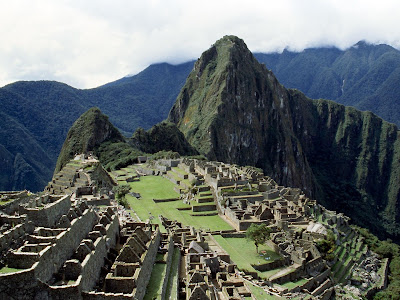 Machu Picchu and other Inca sacred sites were intentionally built on intersecting fault lines. That is the conclusion reported by Rualdo Menegat, a geologist at Brazil's Federal University of Rio Grande do Sul, on 23 Sept. 2019 at the Geological Society of America (GSA) Annual meeting in Phoenix.

According to Menegat, the fault network at Machu Picchu offered the Incas the advantages of rocks that could be shaped more easily, and the faults channeled snow melt and rainwater straight to the site.

Menegat presented the results of a detailed geoarchaeological analysis that suggests the Incas intentionally built Machu Picchu -- as well as some of their cities -- in locations where tectonic faults meet. "Machu Pichu's location is not a coincidence," says Menegat. "It would be impossible to build such a site in the high mountains if the substrate was not fractured."

Using a combination of satellite imagery and field measurements, Menegat mapped a dense web of intersecting fractures and faults beneath the UNESCO World Heritage Site. His analysis indicates these features vary widely in scale, from tiny fractures visible in individual stones to major, 175-kilometer-long lineaments that control the orientation of some of the region's river valleys.

Menegat found that these faults and fractures occur in several sets, some of which correspond to the major fault zones responsible for uplifting the Central Andes Mountains during the past eight million years. Because some of these faults are oriented northeast-southwest and others trend northwest-southeast, they collectively create an "X" shape where they intersect beneath Machu Picchu.

Menegat's mapping suggests that the sanctuary's urban sectors and the surrounding agricultural fields, as well as individual buildings and stairs, are all oriented along the trends of these major faults. "The layout clearly reflects the fracture matrix underlying the site," says Menegat. Other ancient Incan cities, including Ollantaytambo, Pisac, and Cusco, are also located at the intersection of faults, says Menegat. "Each is precisely the expression of the main directions of the site's geological faults." 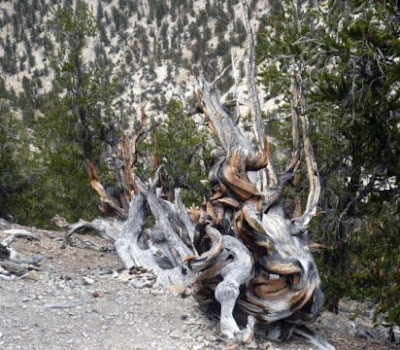 
Scientists are trying to gain a better understanding of the global geomagnetic field during extreme changes in the field such as reversals and shorter term excursions. To understand shifts in the geomagnetic field, a huge amount of data has to be gathered and compared. The data is gathered from lava flows, old ice masses, and magnetized minerals inside solidified igneous rock.

Research suggests that Earth was blasted with a period of intense solar activity about 7000 years ago. Traces of the event can be seen in the carbon signature of some very old tree rings.

Evidence of the solar event was found while looking at the amount of the carbon-14 isotope in the rings of an ancient bristlecone pine tree from California, pictured above. 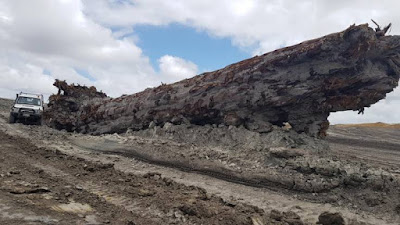 
Recently, an ancient tree was discovered in New Zealand that contains a record of a reversal of Earth's magnetic field. The tree species is called Agathis australis, known by its Māori name Kauri. It was discovered buried under 26 feet of soil during excavation work for the expansion of a geothermal power plant.

The tree measures eight feet in diameter and 65 feet in length. Carbon dating revealed it lived for 1,500 years, between 41,000 and 42,500 years ago. Read more about this fascinating discovery here.

Posted by Alice C. Linsley at 5:12 AM No comments: