Francis Collins on the Coronavirus 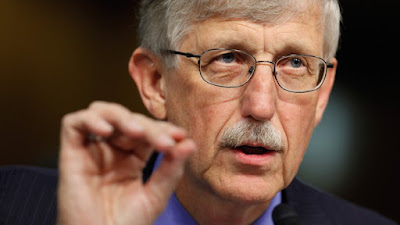 The Atlantic interviewed Dr. Francis Collins, Director of the National Institutes of Health. This interview is informative. Please read to the end.

NIH Director: ‘We’re on an Exponential Curve’
Francis Collins speaks about the Coronavirus, his faith, and an unusual friendship.

If you are seeking a prayer during this time, you might use this (adapted from the Book of Common Prayer).

O Lord, save thy servants;
Who put their trust in thee.
Send them help from thy holy place;
And mightily defend them.
Let the plague pass by them and have no advantage of them;
Nor the wicked approach to hurt them.
Be unto us, O Lord, a strong tower;
Shelter us in thy wings.
O Lord, hear our prayer.
And let our cry come unto thee.


O Lord, Almighty God, look down from heaven and behold, visit, and relieve thy sick servants. Look upon them with mercy, give them comfort and sure confidence in thee, defend them from all dangers, and keep them in perpetual peace and safety; through Jesus Christ our Lord. Amen.

Posted by Alice C. Linsley at 7:43 AM No comments:

Human remains kept in a Kent church are those of England's earliest known female saint, St Eanswythe. She was a member of the Kent royal family and is believed to have founded monastic communities in England in AD 660. These are the earliest verified remains of an English saint, and of a relative of the British monarch.

She is the patron saint of St Mary and St Eanswythe’s Church in Folkestone, Kent, situated near cliffs overlooking the English Channel.

Eanswythe was a devout Christian who refused to marry the pagan king of northeast England. Instead, she became a nun. This was a common practice among royal maidens who were denied marriage or refused to marry.


One of the earliest known male English saints is St. Alban who died in 305 AD. He was beheaded when he refused to renounce his Christian faith. Alban is honored as Britain’s first saint, and his hillside grave became a place of pilgrimage. St Albans Cathedral stands near the site of his execution.

Posted by Alice C. Linsley at 1:50 PM No comments: