CWIS-ASA: A Place to Connect

As a professor at a Christian college, would you like to know other Christian women professors near you?  Well, you can do all that and more by searching the ASA Membership Directory at the ASA website.

The search fields I find most useful are:
Name – to find one person
Location (i.e., State) – to find who is in my state
Profession – to find someone in the clergy, medical, government research,  and other professions.
Discipline – to find people in biology, astronomy, engineering, or other areas

After you decide how these search elements may be helpful to you, you have a choice of searching the entire ASA membership list, or you may search “Affiliate:  Christian Women in Science.”  Checking CWIS will help you find others who have signed up as members of our ASA group, thereby demonstrating their interest and commitment to the challenges faced by Christian women in STEM.

While you’re at it, check out the ASA website in general. You’ll find a lot of interesting information – major science headlines, God and Nature magazine, information on the upcoming ASA annual conference (July 2014 in Ontario), and loads of great articles, blog posts, news feeds, etc., on science and Christianity. Check it out today!  And use the ASA Membership Directory to find other CWIS members in your area.

Related reading:  CWIS Charter, CWIS Board, CWIS is Here for You!

Posted by Alice C. Linsley at 5:45 AM No comments:

Christian Women in STEM: CWIS is here for you! 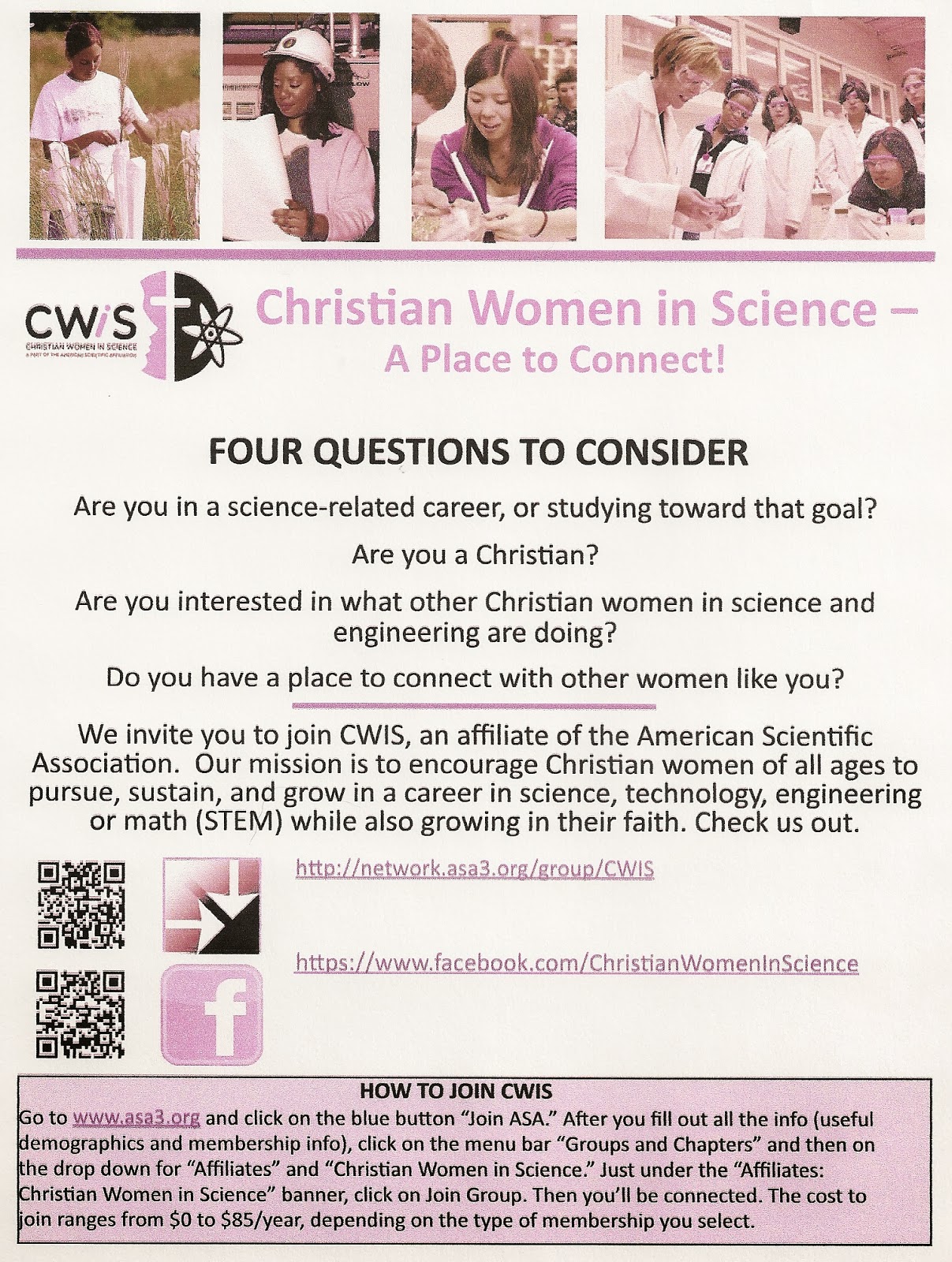 
One gets the impression that Christian schools are far behind public and secular private schools when it comes to stimulating interest in Science, Technology, Engineering and Math (STEM). Here is a Christian School that is bucking that trend. Valley Christian School has its main campus in Cerritos, California.

The Nation’s science, technology, engineering and math (STEM) workforce is crucial to America’s innovative capacity and global competitiveness. Yet women are vastly underrepresented in STEM jobs and among STEM degree holders despite making up nearly half of the U.S. workforce and half of the college-educated workforce.

That leaves an untapped opportunity to expand STEM employment in the United States, even as there is wide agreement that the nation must do more to improve its competitiveness.

• Although women fill close to half of all jobs in the U.S. economy, they hold less than 25 percent of STEM jobs. This has been the case throughout the past decade, even as college-educated women have increased their share of the overall workforce.

• Women with a STEM degree are less likely than their male counterparts to work in a STEM occupation; they are more likely to work in education or healthcare.

There are many possible factors contributing to the discrepancy of women and men in STEM jobs, including: a lack of female role models, gender stereotyping, and less family-friendly flexibility in the STEM fields. Regardless of the causes, the findings of this report provide evidence of a need to encourage and support women in STEM.

At Valley Christian School, we are committed to stimulating and nurturing all of our student’s interests in STEM education. More than just an academic requirement, VCS is committed to several programs that are designed to develop a passion in our students for STEM….from Science Camps and Robotic Camps to partnerships with NASA. Parents such as Greg Campbell, Paul and Ginger De Vries, John Ward and Barbara Sarmiento are just a few who help out in these areas. Faculty like John Tiersma and Pamela Leestma, and many more, are developing visionary programs.

Here is some recent news that proves the school's commitment to Science and Technology:


Valley Christian STEMWorks kicked off the 2014 First Robotics Competition season at the VCHS chapel on Saturday, January 4. A sizable crowd of approximately 90 attendees, including 21 members of EPIC Robotz team 4415 were present. This is Valley Christian’s 3rd year with high school robotics, the first year solely as a VCS team.

For this year’s challenge called “Areal Assist,” the robot will be designed to move and throw a 30-inch ball from one robot to another, then pass through a rectangular hole 12 feet above the ground. The mentors and team members have 6 weeks to design, build, and test their creation as they prepare for the March 20-22 competition at the Long Beach Convention Center. The team will also complete a business component to create web sites, produce animations, marketing, pit design, and acquire data for a business intelligence application.

Posted by Alice C. Linsley at 8:34 AM No comments: