All non-Africans alive today can trace their roots back to ancient humans who left Africa between about 72,000 and 50,000 years ago. That’s the conclusion of three separate groups of scientists. They all published new studies online September 21 in Nature.

These studies examined DNA from different groups of modern people. The earliest human explorers left Africa in a single wave of migration, each study concluded. Then those explorers bred with Neanderthals and spread across the world. On that much, all these teams agree. But many details of that history remain unanswered.

Scientists often have wondered when humans first left Africa. And did it happen once, twice or many times? Archaeological evidence from modern humans in Asia dates back 80,000 years. And human DNA from remains of a Neanderthal woman in what’s now Siberia suggested some humans left Africa more than 110,000 years ago.

Posted by Alice C. Linsley at 1:27 PM No comments: 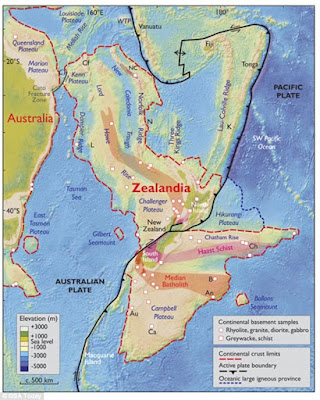 A study done by earth scientists in New Zealand and Australia claims that a continent is hidden under the ocean. In their paper, titled 'Zealandia: Earth's Hidden Continent,' the geologists argue that Zealandia has all four attributes necessary to be considered a continent.

It is believed that the 94 per cent of Zealandia that is submerged broke off from Australia and sank 60-85 million years ago.

At 4.9 million square kilometers, Zealandia would be the smallest continent. Zealandia's crust is much shallower than the surrounding oceanic crust, and more closely resembles continental crust rather than oceanic crust. Further, a narrow strip of oceanic crust separates Australia from Zealandia.

The proposed world map below shows Zealandia, the eighth continent. Though most of the continent is submerged, scientists say it has all the geologic hallmarks of a separate continent.

A six-year study by the GNS Science research institute in New Zealand found that there could be tens of billions of dollars worth of fossil fuels in offshore regions around the landmass.

Posted by Alice C. Linsley at 9:53 AM No comments: