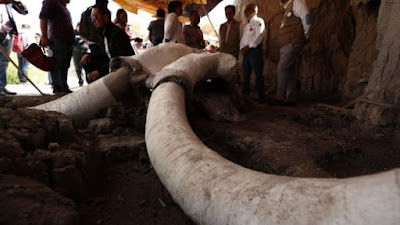 Humans trapped mammoths 15,000 years ago near Mexico City. The National Institute of Anthropology and History (INAH) announced the discovery of at least 14 woolly mammoth skeletons on Wednesday, November 6.

To date, 824 bones have been found in traps 5.5 feet deep and 82 feet long in the city of Tultepec, home of a Mammoth Museum that houses an almost complete mammoth skeleton discovered in 2016.

The traps also contained remains of camels and a horse. 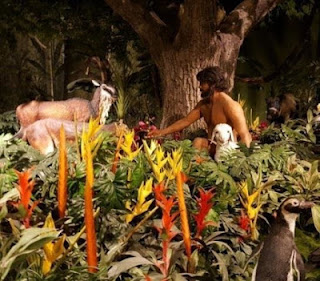 Genesis 2:18-23 is a delightful folk narrative about God bringing animals to Adam to name. The story does not receive much attention from Bible scholars because they are at a loss to explain the origin of this narrative.

Genesis 2 is recognized as the older of the creation stories. The context of Genesis 1 is Babylonian and much later. The context of Genesis 2 is African, and it is in African tales that we discover the purpose of this account of Adam naming the animals. African animal tales highlight social relationships and hierarchies. By giving Adam the ruler's role in naming the creatures over which he is to have dominion, God establishes a hierarchy in the order of creation.

The Man and the animals are created from the same substance. They are formed from the earth and are earth creatures. As the story continues Adam discovers that he is unique. There is no other creature like him. He is alone until God fashions a companion for him, the woman.

The woman is also unique. She is made from the man, not the soil. In a sense, the woman is the crown of creation and as such she is vulnerable. The spirit of rebellion against God's order in creation makes her his first victim. By obeying the serpent instead of God, Eve became subjected to a creature of low estate. She exchanged her crown for an abased state. The first trespass was against God's order of creation.

St. John Chrysostom wrote, "Do you see how the devil led her captive, handicapped her reasoning, and caused her to set her thoughts on goals beyond her real capabilities, in order that she might be puffed up with empty hopes and lose her hold on the advantages already accorded her?" (From here.)

The social relationships are changed. The animals under Adam's rule are part of a fallen realm. Now the whole of the creation yearns for the day of redemption. In the grand scheme of God's providence, it would be a woman's obedience that would begin the restoration of paradise. Her name is Mary and she is the Mother of Christ our God.


Related reading: Animals in Ancient Near Eastern Art; The Animals on Noah's Ark; Recovering the African Background of Genesis; An African Reflects on Biblical Names

Posted by Alice C. Linsley at 5:45 AM No comments:


What would happen if scientists weren’t rewarded for the long-term reproducibility and rigor of their findings, but rather became a factory that produced and published highly exciting and innovative new discoveries, and then other scientists and companies spent resources on the follow up studies and took all the risk?

Just as banks in 2008 made money from selling the loans, not holding the loans, the quality of the loan ceased to be meaningful to them. Likewise, once published, the innovators of novel science often move onto the next new innovation, and because of publication bias and the “file drawer effect,” we never hear about it if their findings fail in the hands of others. Of course, reputations for good work affect scientists as much as anyone else, but one or two “real” advances by a researcher will erase any downside to even a litany of other findings that disappeared into the trash pile of time since no one else can reproduce them. Indeed, in a now famous report from Bayer Pharmaceuticals, 65 percent of published scientific findings were not reproducible by Bayer scientists when they tried to use them for drug development.

Posted by Alice C. Linsley at 3:19 PM No comments: