The Intriguing Story of the Dingo 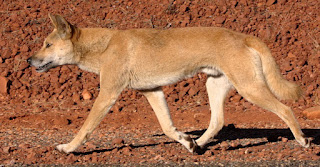 The Australian dingoes descend from domesticated dogs coming from East Asia, probably with the Austronesian expansion into Island Southeast Asia around 6000 years ago. They were introduced from a small population of dogs and have since roamed wild in most of Australia.

That is the belief of some researchers. However, others question whether dingoes’ ancestors were ever domesticated. The dingo is a genetic intermediate between domestic dogs and wild wolves. This is probably because dingoes spent thousands of years isolated from other dog species. Modern domestic dogs didn’t arrive in Australia until 1788, when they were introduced by Europeans.
Bill Ballard at La Trobe University in Melbourne, Australia, believes that the dingo may have been introduced to Australia as a tamed wild animal, one accustomed to living alongside people but not domesticated through selective breeding.
In 2017, the dingo won the “World’s Most Interesting Genome” competition held by US biotech company Pacific Biosciences.

Posted by Alice C. Linsley at 8:33 AM No comments:

In the north of the Arabian Peninsula, bordering the Nefud Desert, archaeologists recently catalogued vast stone monuments dating back 7,000 years. These are called mustatils, meaning “rectangles” in Arabic.
Over 1000 of these prehistoric sandstone walls are found in northwest Saudi Arabia. They are clustered in groups of two to 19 and spread across 200,000 square kilometers (77220. sq miles).
The largest mustatil is over 1,500 feet long and consists of 12,000 tons of stone. Recent fieldwork in AlUla and Khaybar Counties, Saudi Arabia, demonstrates that these structures are architecturally complex, featuring chambers, entranceways and orthostates.
A team of archaeologists led by Huw Groucutt of the Max Planck Institute for Chemical Ecology in Germany has been studying satellite images of the southern edge of the Nefud Desert. The team identified and studied 104 new mustatils up close.
First discovered in the 1970s, the purpose of these rectangular structures remains mysterious. One theory is that they are sacred enclosures for ceremonial gatherings and feasts. "Our interpretation of mustatils is that they are ritual sites, where groups of people met to perform some kind of currently unknown social activities," Groucutt said. "Perhaps they were sites of animal sacrifices, or feasts."
The structures were built during the African Humid Period (12,600 B.C. to 4,000 B.C.). During this time, the Sahara and the Arabian Peninsula had more plentiful rainfall and the regions were green with lush vegetation.
Read more here.
Posted by Alice C. Linsley at 12:58 PM 1 comment: