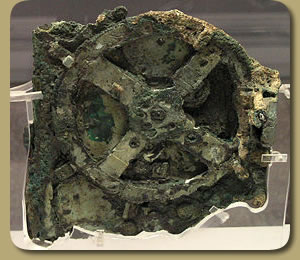 The Antikythera Mechanism is a Greek geared device, constructed around the end of the second century B.C. It calculated and displayed celestial regular cycles such as the phases of the moon and a luni-solar calendar. The mechanism predicted lunar and solar eclipses on the basis of Babylonian arithmetic-progression cycles. The inscriptions support suggestions of mechanical display of planetary positions

Calendars were important to ancient societies for timing agricultural activity and fixing religious festivals. Even today the seasons of the Church calendar align to astronomical cycles.

The mechanical device is named after its place of discovery in 1901 in a Roman shipwreck, the Antikythera. It is more complex than any known device for at least a millennium afterwards.

The mechanism has three main dials. The front dial has two concentric scales. The outer ring is marked off with the days of the 365-day Egyptian calendar, which became the basis of the later Julian calendar introduced in 46 B.C. Inside this, there is a second dial marked with the Greek Zodiac signs and divided into degrees. The calendar dial can be moved to compensate for the extra quarter day in the year by turning the scale backwards one day every four years.

In the second century B.C, Hipparchos developed a theory to explain the irregularities of the Moon's motion across the sky caused by its elliptic orbit. This theory is reflected in the gearing of the mechanism, revealing technical sophistication. According to Plato, the ancient Nilotes had been observing and recording data about celestial events for 10,000 years. Greek knowledge of celestial cycles and events built on that of the sages and priests of the ancient Nile Valley.

Watch this video about the Antikythera Mechanism.

Related reading: Antikythera: A computer 1500 years ahead of its time; The Water Clock; Plato's Debt to Ancient Egypt; Theories of Time; Gain a Heart of Wisdom