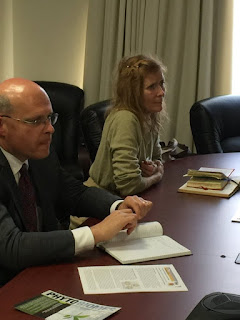 Ann Marie Thro is a scientist whose experiences throughout her life have made her the exceptional person she is today. She was raised in a military family which meant frequent moves and exposure to new places and people. She is the oldest of three siblings. She is 67 years old and very active professionally. She is a member of the American Scientific Affiliation and a former board member of Christian Women in Science (CWIS). She enjoys gardening, hiking, and working with animals. She also enjoys reading, singing, and needlework.

Ann was raised a Catholic and she believes that this religious upbringing gave her an awareness of Christ’s love. She attended college during the “hippie era” and during those years she questioned many of the Church’s beliefs.

Ann began to question many things during the 1960s. She felt disappointment that different theories of reality presented by secular philosophies seemed empty. Philosophy was taught as a chronological flow of ideas, but not as a search for wisdom. No one attempted answers to the questions she was asking, and that left nothing. Still, Ann resisted the nihilism of her day.

Several years later Ann became aware of the work of Dr. Francis Schaeffer, the director of the L'Abri community in Switzerland, founded in 1955. Dr. Schaeffer and his wife Edith were Christian theologians and philosophers whose writings from a Christian perspective interested Ann. So, desiring to travel, she went to L’Abri. She listened and found the Schaeffer’s analysis of Western culture to be convincing, but she was not willing to change her lifestyle.

She started praying again, wondering what God had for her future. She couldn’t find a job so she decided to return to school to “retool” for a future career. She completed some courses at a community college, and eventually found an assistantship in agricultural science. Her job prospects were good, but her heart was still stiff toward Jesus Christ.

Ann was drawn to plant breeding as a way to serve. When she first became involved in agriculture science there were relatively few women in the field. The numbers of women increased rapidly. Today there are many women in agricultural sciences.

In 2014, she became senior advisor for Plant Health Production and Products. Ann was in the National Institute for Food and Agriculture.

Plant breeding began in the 1800’s and is increasingly important today. Ann explains, “It is one of the few ways that humans can use new science to cope with many of the challenges that the world faces today: challenges such as population growth and the need for food that is both affordable and good for our health; and, challenges such as variable and extreme weather and climate, and the need to protect the environmental. 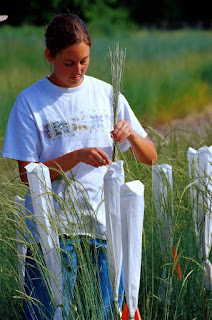 Simply defined, plant breeding is the human-aided development of new plant varieties, including new types of seeds that have needed characteristics. The basic steps involve the use of various methods, old and new, to make new, genetically-different plants, and then testing, and selecting among.

When we read about new discoveries in sciences such as biology, nutrition, genetics, micro-biology, information science and computing, soil science, climate science, engineering, robotics, and others, plant breeding is the discipline that brings all of this knowledge together to produce the food that we eat and all the other types of plants that we use. Without plant breeding, most of this new science would remain interesting but theoretical. Plant breeding is one of the major pathways through which science reaches our table and our lives.”

Ann has worked on research and development projects in Congo, South America, and Afghanistan.

Ann Marie Thro has written, “As a Christian, I often ask the Lord to help me see where I can be most useful. When I want to ‘star’, I often end up being disappointed, but when I want to 'serve', the Lord has given me very satisfying work and opportunities. I enjoy the role of taking the initiative to look around, see things that need to be done, and get started. Often others then join in and carry on the work.

Seeking to be useful is a role that both men and women can take; yet it fits a woman’s role in every age – ancient and modern. In my own case, as a scientist, this has led me out of research because I found that others were more gifted. I found instead that I have a gift for research coordination. I am grateful to have been able to bring different researchers together into networks and projects. This benefits science and the public by creating opportunities to exchange good ideas, recruit young scientists, and search for funding. These are things that researchers value, but they are often too busy. That’s where I can help, as someone who understands the world of science, seeks to be useful, and enjoys creating connections and looking for opportunities.”

Plant breeding provides practical solutions to real needs. It allows us to share God’s enjoyment and marvel at the world’s plants and wonders of variation. We are living in the most exciting time in agricultural sciences since the rediscovery of Mendel, also a Christian.