Erasmus: A Moderate Voice in a Turbulent Time 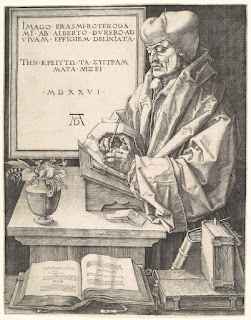 Erasmus was born in 1446 in Rotterdam, Netherlands, at the time of the Black Death. His mother, Margaret, was the daughter of a physician. She was left to care for her two children when her husband traveled to Italy to become a copyist.

His mother sent him and his older brother to the Cathedral school in Deventer. There he studied under the Brothers of the Common Life. This is where he began to follow God.

His mother and father died nine years later leaving him and his brother to the care of their paternal uncles.

Erasmus decided to join the Augustinian order and he entered the monastery. He joined the Augustinians because he wanted to travel, gain academic elbow room, and have put behind the barbarians who discouraged him. In 1492, he was ordained priest being Secretary to the Bishop at Cambric. The Bishop sent Erasmus to Paris to study theology. He hated being in Paris. His dorms stank of urine and it wasn’t comfortable being there. The food was horrible too. He also disliked the disciplinary system saying it was too brutal. Soon after, he began a writing career  which took him all over Europe.

In 1499, he went to England where he met Thomas More, his life long friend. Erasmus and More favored moderate dialogue and religious tolerance. They had a different style of arguing than the fiery Martin Luther. Erasmus hated the bickering on the both sides because he thought it very un-Christian.

On the same trip to England, Erasmus heard John Colet teach from the Bible. This was different from what he had studied in Paris. Colet encouraged Erasmus to become a primitive theologian who stupid Scripture. 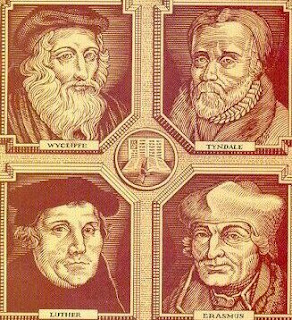 Erasmus devoted himself to the Greek language, in which the New Testament was written. He wrote to Colet ‘I cannot tell you dear Colet, how I hurry on with all rails set to holy literature. How I dislike everything that holds me back.”

Erasmus, Wycliffe, Tyndale and Luther are considered the great Bible translators of the Middle Ages.

Erasmus translated the New Testament in the original Greek language. The Bible had notes of his own Latin traditions. Erasmus’ Bible corrected over 600 errors from Jerome’s Vulgate (Latin).

Erasmus wrote the Bible so everyone could understand it. Two of the most noteworthy praises came from Pope Leo X and Martin Luther, a German monk who had launched the Protestant Reformation.

Erasmus became famous for his writings. In 1530, 10-20% of books had Erasmus’ byline. Erasmus wrote to ‘correct the errors of those whose religion is usually composed of ceremonies and observations of a material sort and neglect the thing to conduce piety.”

He became famous for his satire of monastic and ecclesiastic corruption and miracles performed by images. His attack on the church's corruption caught Luther’s attention And Luther tried to win him to the Lutheran cause. Luther attacked Erasmus and said Erasmus would die in the wild, not enter the Promised Land.

Erasmus found that he liked the German language. He told Leo X the German language was a mighty trumpet of the Gospels truth. At the same time, he stopped printing Luther’s writings because he didn’t want his efforts tangled with the reformers.

For four years, Erasmus moderated both sides. However, he remained a Roman Catholic. His position between both sides didn’t please anyone. He wrote, "I only wish now I am old, I be allowed to see the results of efforts, but both sides approached and seek me. Some say that I am with Luther because I don’t attack him. Some say I am a coward who has forsaken the gospel for not being with him.”

Erasmus died in 15396. He was most known for his translation of the Bible and his correction of some linguistic problems in translation.

Email ThisBlogThis!Share to TwitterShare to FacebookShare to Pinterest
Labels: Erasmus