How Fast is the Universe is Expanding?


Albert Einstein's general theory of relativity is one of the greatest achievements of 20th-century physics. Published in 1916, it explains that what we perceive as the force of gravity arises from the curvature of space and time. The theory predicted that the universe must either expand or contract, but Einstein thought the universe was static, so around 1917, he introduced the idea of a force that counteracts gravity on a cosmic scale so that the universe neither shrinks nor expands. This is known as Einstein's cosmological constant, an idea that he later rejected. 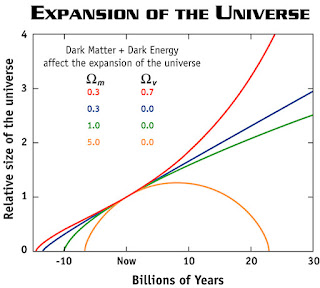 
Edwin Hubble's 1929 observations of nearby galaxies finally confirmed that the universe is expanding. However, the universe seems to be expanding faster that scientists thought. Using quasars, scientists have found variations in the calculations and wonder what might be causing the discrepancy. One theory involves dark matter and the possibility that dark energy has been growing stronger.

In 2011, three astronomers, Paul Perlmutter, Adam Riess and Brian Schmidt, shared the Nobel Prize in Physics for their discovery that the Universe was expanding at an accelerating rate. The discovery led to the widespread acceptance of the idea that our Universe is dominated by a mysterious force called dark energy.

The theory of dark energy had been circulating since the 1990s when observations made with the Hubble Space Telescope made astronomers aware that the expansion of the universe is accelerating and dark energy was hypothesized as a factor.

Using gravitational lensing, astronomers have imaged distant quasars with the Hubble Space Telescope. Gravitational lensing works because light around a massive object, such as a black hole, is bent, causing it to act as a lens for the things that lie behind it. Astronomers routinely use this method to study stars and galaxies behind massive objects. They used the imagery to determine that the Universe is expanding quicker that previously thought.

Observations made in the 1920s showed that the more distant a galaxy was, the faster it was receding from us. In theory, the Universe of our distant past was smaller, with objects closer together, denser and hotter. As the Universe expands the fabric of space stretches and cools. The distant galaxies move away at ever faster rates.

Now astrophysicists are working with a larger and more sophisticated dataset to measure expansion rates. Subir Sarkar, (University of Oxford) reports that his research team "analysed the latest catalogue of 740 Type Ia supernovae - over 10 times bigger than the original samples on which the discovery claim was based - and found that the evidence for accelerated expansion is, at most, what physicists call '3 sigma'." In other words, Sarkar and his team concluded that the Universe is expanding at a constant rate. If that is true, there is no necessity to hypothesize dark energy.

Clearly, astrophysicists are struggling with a paradox. How it is possible for the collective gravity from all the matter initially expelled into the Universe to slow everything down, and also to lead to accelerating expansion of the Universe?

Will you be the scientist who resolves this difficult question?