However, among the scientists in these organizations there is a range of positions as to which factors contribute most to warming. All tend to agree that solar radiance and Earth-Sun geometry are very significant. Yet we hear about this less than we hear about the danger of CO2 emissions from fossil fuel energy sources.

Many examples of climate change can be found. Camels once roamed the Arctic tundra. Antarctica was home to tropical plants including ferns, palms, rainforest trees, and Baobab trees which are found in Africa and Madagascar.

Greenland once was green and people planted crops there. Greenland's climate changed to ice within 1000 years.

The Canadian Tundra had members of the camel family about 40 million years ago. The American Arctic camel, which went extinct at the end of the last ice age, once roamed the northern regions with woolly mammoths, dire wolves, sabertooths, and giant ground sloths. 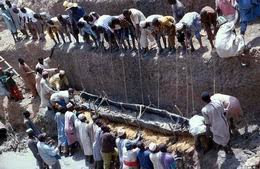 The Sahara Desert was once wetlands that sustained large herds and shipping industries along it many lakes and rivers. These water systems were interconnected so that it was possible to go by boat from the Nile to the Atlantic coast of modern Nigeria. One of the world's oldest boats was found in the region of Lake Chad (Noah's homeland). The 8000 year old Dufuna dugout (shown above) was buried 16 feet under clays and sands whose alternating sequence showed evidence of deposition in standing and flowing water.

The "over-representation" of which Al Gore spoke (Grist Magazine May 9, 2006) has not benefited anyone. It has encouraged extremism and hysteria.


"Nobody is interested in solutions if they don't think there's a problem. Given that starting point, I believe it is appropriate to have an over-representation of factual presentations on how dangerous (global warming) is, as a predicate for opening up the audience to listen to what the solutions are...." --- Al Gore, chairman and co-founder of Generation Investment Management, a London-based business that sells carbon credits.

I want to hear from a balanced forum of scientists. I think skepticism is a good thing. I want to know about their doubts andn I hope some will be bold and fearless enough to share their doubts.

The original research correlating climate, glaciation and orbit and was done by University of California (Santa Barbara) earth scientist Lorraine Lisiecki. Lisiecki believes that climate change involves complicated interactions between different parts of the climate system and three orbital systems: 1) eccentricity of Earth’s orbit; 2) tilt of Earth’s axis; and 3) precession or change in the orientation of the rotation axis.

Lisiecki mentions earth's axial precession as a factor that influences earth's climate. This is a cycle of between 25,000 and 28,000 years. An imaginary line extending from the Earth’s North Pole axis into the heavens points to Polaris. In the cycle of Earth’s Great Year (Platonic year) the line off the North Pole scribes a complete circle in the heavens every 25,000 to 28,000 years. The variance is due to Earth's wobble.

Climate change is influenced by Earth's axial precession. Climate and atmospheric changes appear to become more acute toward the end and beginning of a new Great Year. Precession has an effect on hydrological cycles in the hemispheres.

Evapotranspiration, the movement of water from the land to the atmosphere, increased to about 1 inch/6.2 millimeters per year from 1982 to 1998. However, when the Earth completed its axial precession in the summer of 1998, evapotranspiration slowed dramatically and stopped in some parts of the world. Areas that began to dry include southeast Africa, much of Australia, central India, large areas of South America, and parts of Indonesia. At the same time, parts of Pakistan and Australia, and areas of the Sahal such as central Niger, experienced flooding from excessive seasonal rains. The same is true for parts of North America.


Not free to question?

Is the theory of catastrophic global warming the consensus of the scientific community? I doubt that. Speaking in 2009, Dr. Richard Lindzen (Massachusetts Institute of Technology), one of the world's leading climatologists, claimed that there isn’t sufficient evidence to draw firm conclusions about anthropogenic global warming. In the subsequent 8 years, global warming alarmists have made numerous attempts to persuade the world that global warming is a fact, and yet the data they present remains ambiguous.

There is no doubt that warming is taking place in some parts of the world, but not in other parts. For example, there is a cooling trend in Germany. Consider how the mean temperatures for the month of February have dropped in Germany since 1988, just ten years prior to the completion of Earth's Great Year. 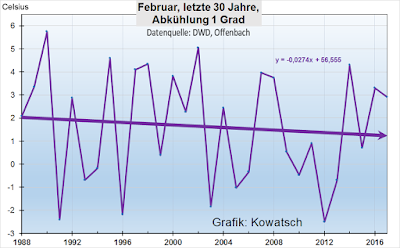 February mean temperature over the past 30 years in Germany, data from the DWD
Chart: Josef Kowatsch

Those profiting from the global warming “crisis” stress the melting of the Arctic glacial ice but conveniently fail to point out that the glacial mass in Antarctic is growing. Here is an excerpt from one a report published in Science Magazine:

An International Polar Year aerogeophysical investigation of the high interior of East Antarctica reveals widespread freeze-on that drives significant mass redistribution at the bottom of the ice sheet. While surface accumulation of snow remains the primary mechanism for ice sheet growth, beneath Dome A 24% of the base by area is frozen-on ice. In some places, up to half the ice thickness has been added from below. These ice packages result from conductive cooling of water ponded near the Gamburtsev Subglacial Mountain ridges and supercooling of water forced up steep valley walls. Persistent freeze-on thickens the ice column, alters basal ice rheology and fabric and upwarps the overlying ice sheet, including the oldest atmospheric climate archive, and drives flow behavior not captured in present models.

Taking into consideration what you have read here, what position should you take when pressed about climate change? What would you say in good conscience and what would you not want to say?

Email ThisBlogThis!Share to TwitterShare to FacebookShare to Pinterest
Labels: Climate