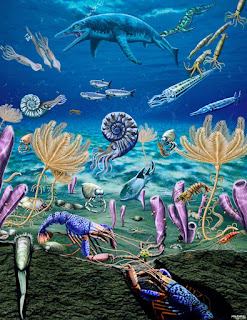 
Researchers studying rocks unearthed from a site in Idaho discovered a variety of 250 million year  fossils. They suggest that marine life bounced back more quickly than was thought after the 'Great Dying' of the Permian Period, which began about 299 million years ago. The Permian Period ended in the largest mass extinction ever known. Approximately 96 percent of marine species went extinct.
The Paris Biota researchers found sharks, squid-like creatures, bony fish and creatures that looked like sponges and starfish. They found a fossil that appeared to come from a marine reptile that resembled the modern dolphin. The researchers believe that marine life recovered quickly with a large diversity in the Early Triassic, the period that followed the Permian.
Read more here.