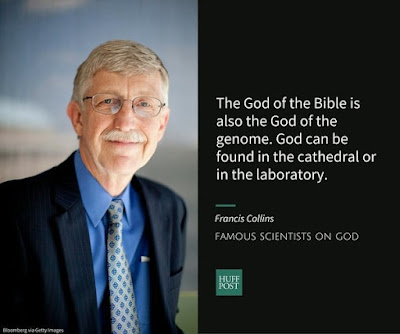 Francis Sellers Collins is an American physician-geneticist noted for his discoveries of disease genes and his leadership of the Human Genome Project. In August 2009, he became the director of the National Institutes of Health (NIH) in Bethesda, Maryland. Under his direction the the Human Genome Project (HGP) was completed in April 2003.This was an international research effort to sequence and map all of the genes of members of Homo sapiens. With this data, scientists are now able to read the complete genetic blueprint for humans. 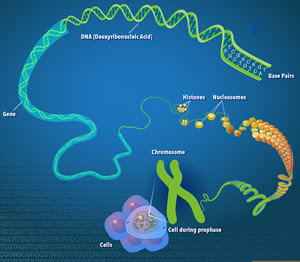 Collins is a Christian. Here are two excerpts from his book The Language of God: A Scientist Presents Evidence for Belief.

“Will we turn our backs on science because it is perceived as a threat to God, abandoning all the promise of advancing our understanding of nature and applying that to the alleviation of suffering and the betterment of humankind? Alternatively, will we turn our backs on faith, concluding that science has rendered the spiritual life no longer necessary, and that traditional religious symbols can now be replaced by engravings of the double helix on our alters?
Both of these choices are profoundly dangerous. Both deny truth. Both will diminish the nobility of humankind. Both will be devastating to our future. And both are unnecessary. The God of the Bible is also the God of the genome. He can be worshipped in the cathedral or in the laboratory. His creation is majestic, awesome, intricate and beautiful - and it cannot be at war with itself. Only we imperfect humans can start such battles. And only we can end them."


"The comparison of chimp and human sequences, interesting as it is, does not tell us what it means to be human. In my views, DNA sequence alone, even if accompanied by a vast trove of data on biological function, will never explain certain special human attributes, such as the knowledge of the Moral Law and the universal search for God. Freeing God from the burden of special acts of creation does not remove Him as the source of the things that make humanity special, and of the universe itself. It merely shows us something of how He operates."