Lead is harmful to humans. In recent years, the water supplies of some American cities has been found to have high concentrations of lead. Flint, Michigan made the news when it was discovered that the water wasn't properly treated. Lead from aging service lines began leaching into the Flint water supply after the city tapped into the Flint River as its main water source.

The problem of lead contamination is not a new problem. The water systems of ancient Rome used lead pipes. These pipes disintegrated, leaving lead residue in the soil. Researchers can use these lead trails to figure out the urban expansion around 33 BC.

Here is a report:


Just as modern cities struggle with lead pollution, so may have ancient Rome. And muddy waters preserved the city’s legacy of lead pipes, a new study suggests.

Researchers examined lead levels in dirt drilled from two Roman harbor sites, Ostia and Portus, on the Tiber River. The samples spanned 1000 B.C. to A.D. 1000. Up until around 200 B.C., harbor waters were pristine, but then contamination started to creep in.

The most likely source of lead would have been runoff from pipes in the city’s water system. The timing supports the idea that before aqueducts went in around 300 B.C., Rome’s water system initially employed terra-cotta or wooden pipes that were replaced with lead ones at least a century later. The researchers also link the ups and downs of lead levels to the expansion of the pipe system around 33 B.C. and periods of neglect beginning around A.D. 250. 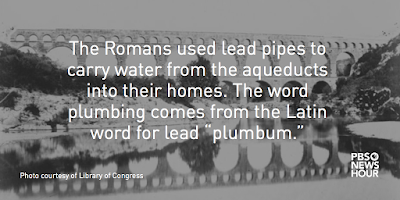