Tar as an Adhesive and Sealant 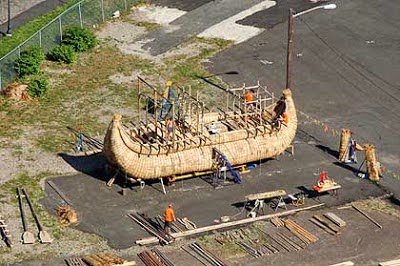 For thousands of years tar has been used as an adhesive and a sealant. This material is mentioned in Genesis 11:3 in connection with the construction of buildings made of brick. The bricks were mortared together using tar. The substance they used is called bitumen and is also known as asphaltum. It is a black, oily form of petroleum that occurs in nature as a byproduct of decomposed plants.

Tar pits are found all over the world. Genesis 14:10 reports that "the valley of Siddim [in Israel] was full of tar pits." The La Brea Tar Pit in California is a tourist attraction. Tar deposits are found in Africa, the Dead Sea, at various sites along the Indus River (Isa Khel), in Central and South America, in Switzerland, and in northeastern Alberta, Canada.

Throughout the biblical world, bitumen was used for the construction of buildings and water-proofing of reed boats like the one shown in the image above. The earliest known reed boat to date that was coated with bitumen, was found at the site of H3 at As-Sabiyah in Kuwait. The boat dates to about 5000 BC. 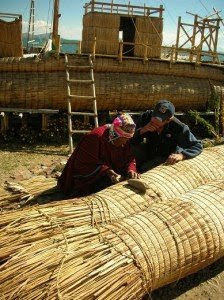 According to Genesis, Noah's ark was made of reeds (gopher). Noah was a great Proto-Saharan ruler. He would have had boat builders (shipwrights), household servants, and gardeners. He is remembered for having a vineyard (Gen. 9:20). As a king, Noah had access to the best and the most plentiful supply of boat building materials.

The historicity of Noah’s concern for animals is supported by the discovery that Proto-Saharan rulers kept royal menageries of exotic animals. The oldest known zoological collection was found during the 2009 excavations at Nekhen on the Nile. The royal menagerie dates to about 3500 BC and included hippos, elephants, baboons, and wildcats.

Noah would have known about the shrine city of Nekhen. It was one of the earliest worship centers for the Horite Hebrew.

The Neanderthals used bitumen at sites such as Gura Cheii Cave (Romania) and Hummal and Umm El Tlel in Syria. Here archaeologists have found stone tools with bitumen adhesive to fasten handles to tools and blades to spears used for hunting. The tar adhesive helped to strengthen and waterproof bindings made of sinew, hide, or plant fibers used to attach bone or stone tools and weapons to handles. The technique is known as hafting with tar.

Related reading: The Archaeological History of Black Goo; The Animals on Noah's Ark