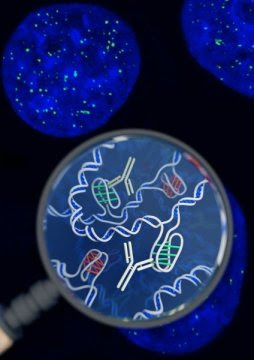 This is an artist's impression of the i-motif DNA structure inside cells, along with the antibody-based tool used to detect it. Credit: Chris Hammang

The i-motif is a four-stranded knot of DNA that is very different from a double helix, where 'letters' on opposite strands recognize each other. In the i-motif knot structure, C letters on the same strand of DNA bind to each other.

To detect the i-motifs inside cells, the researchers developed a new tool -- a fragment of an antibody molecule -- that could specifically recognize and attach to i-motifs with a very high affinity. With the new tool, researchers uncovered the location of 'i-motifs' in a range of human cell lines.

"What excited us most is that we could see the green spots -- the i-motifs -- appearing and disappearing over time, so we know that they are forming, dissolving and forming again," says Dr Mahdi Zeraati, whose research underpins the study's findings.

Dr Zeraati says, "We think the coming and going of the i-motifs is a clue to what they do. It seems likely that they are there to help switch genes on or off, and to affect whether a gene is actively read or not."

Read more here.
Posted by Alice C. Linsley at 9:42 AM No comments:

Email ThisBlogThis!Share to TwitterShare to FacebookShare to Pinterest
Labels: Genetics

Iron armour could be carburized or case hardened to give a surface of harder steel.

A History of Glass


Glass is a material of great interest to archaeologists and materials experts. Because of its fragile nature, many of the oldest glass artifacts are no longer intact.

The oldest known glass manufacturing site was in Egypt. It dates to around 1350 B.C. The glass items produced there were for nobles and high kings. The Egyptians set the early standard in glass-making. They created blue glass beads, beads with embedded amber, and vessels with narrow necks used to store perfume or other precious liquids. They also used glazes of glass to decorate objects made of other materials.

A glass bottle bearing the sign of King Thutmose III, of the eighteenth dynasty of Egypt, is on display in the British Museum in London.

The artisans of Mesopotamian also produced glass. A victory inscription from an Egyptian king claimed that he had brought back skilled glass workers from Mesopotamia.

Decorated glass was produced 1000 years ago at Igbo-Olokun, an archaeological site in the Yoruba city of Ile-Ife in southwestern Nigeria.

The Glastonbury Abbey Project has been reevaluating data from previous excavations at that ancient site. One of the discoveries involves glass making. A reassessment of the Glastonbury glass-producing furnaces proved that Saxon workers were recycling Roman glass imported from Europe, and that the furnaces are nearly 300 years older than expected. They date to about A.D. 700 and are associated with the construction of the earliest stone churches in England. According to archaeologist Roberta Gilchrist (University of Reading) this makes the site’s glass production complex among the earliest and most substantial in Saxon England. 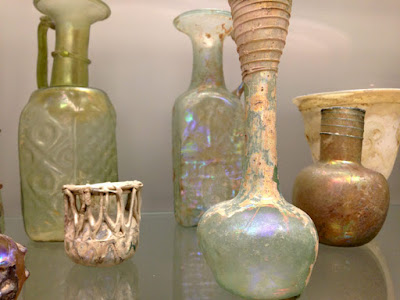 
Glass is made from sand. Early humans probably discovered this when they built bonfires on the sand. The fire's intense heat turned the sand into liquid. When the liquid sand cooled, they noticed that it was hard. It had turned into glass.

The technique of glass blowing made glass less costly and more accessible to the average person of the Roman Empire.

Here is another account of the history of glass.