Besides metals and ores, biblical peoples used resins and oils. A resin is a sticky organic substance that does not dissolve in water (insoluble). Resins are exuded by some trees and plants. The sap of pine and fir trees is a resin. Resins tend to be flammable.

The hard transparent resins, such as the copals, dammars, mastic, and sandarac, are used for varnishes and adhesives. These are especially flammable and require careful storage away from heat and flame.

Oleoresins are a naturally occurring combination of oil and resin that can be extracted from plants. The softer oleoresins include turpentine, frankincense, elemi, and copaiba. Most oleo-resins are extracted from spices such as capsicum, cardamon, cinnamon, and the vanilla bean. Vanilla oleoresin is used in non-food products to provide a vanilla fragrance. Cinnamon oleoresin is used in cinnamon scented candles.

Gum resins like ammoniacum, asafoetida, gamboge, scammony, and myrrh are used to create essential oils. Essential oils were used by biblical peoples for perfumes, medicines, incense, and for purification and anointing.

The gum resin myrrh is extracted from a number of small, thorny trees of the genus Commiphora. The myrrh used by biblical peoples came from trees in Africa, the Arabian Peninsula, and India. Biblical peoples used myrrh to make perfume, incense, and medicine. It was also used to treat sore throats, cramps, inflammation, colic, and digestive problems. Myrrh was used to anoint people in dedication services and in preparation for death. The women who came to the tomb very early in the morning to finish preparing Jesus' body likely had myrrh with them. But He was not there. He had risen! 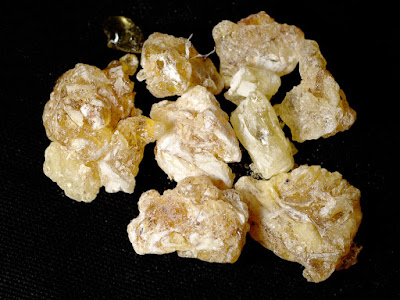 Frankincense resin and the oil produced from it have been used for thousands of years. Frankincense oozes out of the Bosellia tree bark as a gummy sap that hardens into the chucks shown above. These chunks of resin are used to make incense. Many Christians use incense in their services of worship.

There are over 52 references to frankincense in the Bible. Frankincense and myrrh were among the gifts presented to Jesus Christ by the Magi. 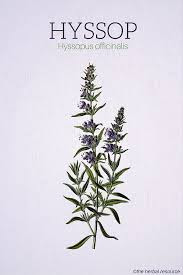 The Chinese have used frankincense as a medicine since at least 500 BC. Ancient Egyptian records make frequent reference to this aromatic resin, including some of its medical uses. It was used to make salves for wounds and sores, and it was a key ingredient in the embalming process. The Phoenicians used the smoke from burning frankincense as an insect repellent.

Hyssop is a small bushy aromatic plant of the mint family. The bitter leaves are used in cooking and herbal medicine (phytomedicine). The biblical peoples used hyssop for purification rites. This is what is meant by these words: "Purge me with hyssop and I shall be clean." (Psalm 51:7)

Hyssop oil has an antispasmodic property that may help relieve spasms in the respiratory system, nervous system, muscles, and intestines. Biblical peoples used it on wounds to prevent infection.

Bdellium (shown below) is a semi-transparent oleo-gum resin extracted from Commiphora wightii and from Commiphora africana. These trees grow in Ethiopia, Eritrea and other parts of sub-Saharan Africa. 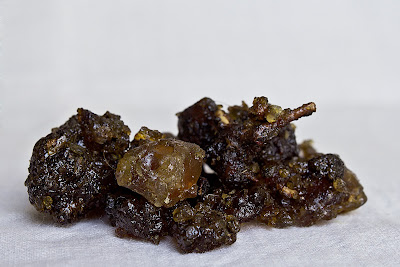 Did the manna eaten by the Israelites in the wilderness look like this?

Bdellium, onyx, and gold are listed as being plentiful in the land of Havilah in Genesis 2. Havilah was at the source of the Nile, in the region that came to be called Nubia. Bdellium also is mentioned in Numbers 11:7, where the manna is described as tasting like coriander seed and looking like bdellium resin.

Among the biblical peoples, bdellium was used medicinally, and as perfume and incense. In Hebrew this resin is called bedolach.