Ores are naturally occurring rocks that contain metal or metal compounds in sufficient amounts to make extracting them worth the effort. The method used to extract a metal from its ore depends upon the reactivity of the metal and so how stable the ore is.

This chart shows the "reactivity" of these elements.


Some ores of importance to biblical peoples include carbon and hematite.

Carbon is a nonmetal that has two main forms (diamond and graphite) and that also occurs in impure form in charcoal, soot, and coal. It was ground to make pigment by biblical peoples and the black powder was used to imprint hands on the wall of caves by prehistoric peoples. 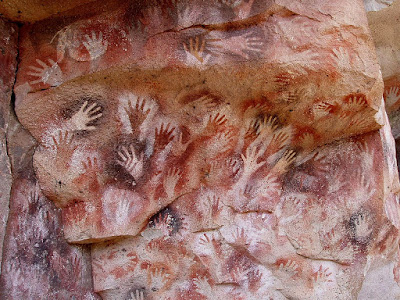 This "show of hands" is in the Cueva de las Manos (Cave of the Hands) located in Perito Moreno, Argentina. The cave art dates between 13,000–9000 BC.


Red ochre was ground into powder from red hematite. Because of its earthly red color, red ochre was used as a pigment by prehistoric peoples. It was used in human burial for over 40,000 years. An incised red ochre stone dating to 100,000 years was found at Blombos Cave, Western Cape, in South Africa. (See "Artifacts of Great Antiquity")