Wild animals have free range around northern Ukraine’s Chernobyl nuclear plant, the site of the world’s worst nuclear accident, which spread radiation throughout the region in 1986.

Studies have hinted that significant populations of European gray wolves and other large creatures live in the Chernobyl Exclusion Zone, the roughly Rhode Island-sized, 1,000-square-mile section from which people were evacuated and can no longer live.

While clear of humans, animals are not free from radiation and its health effects, an active and at times controversial area of research. Many questions remain about the extent to which radiation causes mutations in various species, and whether these could be spread outside the zone.

Posted by Alice C. Linsley at 1:07 PM No comments:

These days there is an overwhelming consensus in our scientific community that scientific talent is not gendered. Universities, funding agencies, conference organizers and individual laboratory leaders around the world are all working to resolve this problem. It is time for the journals to “lean in.” 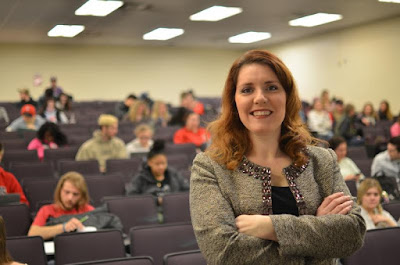 
“Publish or perish” is tattooed on the mind of every academic. Like it or loathe it, publishing in high-profile journals is the fast track to positions in prestigious universities with illustrious colleagues and lavish resources, celebrated awards and plentiful grant funding. Yet somehow, in the search to understand why women’s scientific careers often fail to thrive, the role of high-impact journals has received little scrutiny.

One reason is that these journals don’t even collect data about the gender or ethnic background of their authors. To examine the representation of women within these journals, with our colleagues Jason Webster and Yuichi Shoda, we delved into MEDLINE, the online repository that contains records of almost every published peer-reviewed neuroscience article. We used the Genderize.io database to predict the gender of first and last authors on over 166,000 articles published between 2005 and 2017 in high-profile journals that include neuroscience, our own scientific discipline. The results were dispiriting.

We began by looking at first authors – the place in the author list that traditionally is held by the junior researcher who does the hands-on research. We expected over 40 percent to be women, similar to the percentage of women postdocs in neuroscience in the U.S. and Europe. Instead, fewer than 25 percent first authors in the journals Nature and Science were women.

Our findings were similar for last authors, the place typically held by the laboratory leader. We expected the numbers to match large National Institutes of Health grants, which are a similarly rigorous measure of significance, scientific sophistication and productivity; 30 percent are awarded to women – comparable to the proportion of women tenure-track faculty in neuroscience. The proportion of women last authors was half what we expected – just over 15 percent of last authors in Science and Nature were women.