Battles in the Bible 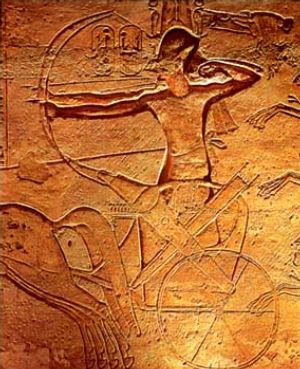 Ramses II at the battle of Kadesh


The Bible records numerous battles between the ancient kingdoms of Egypt, Assyria, Babylon and Persia. Powerful high kings fought to acquire more territory, wealthy ports, and access to mineral resources. Many of these battles are mentioned in extra-biblical sources.

In Numbers 13:26-28, we read about how the Israelite community at Kadesh was given this account: "We went into the land to which you sent us, and it does flow with milk and honey! Here is its fruit. But the people who live there are powerful, and the cities are fortified and very large. We even saw descendants of Anak there."

This is a good description of the Iron Age strongholds that the kings sought to capture. Even the Irsaelite Hebrew (Habiru) wanted control of the fortified high places. Shrine cities, such as Hazor, were governed by Habiru, so the attempts of Joshua and Caleb to take these settlements indicates a power struggle between kinsmen rather than a war between strangers.

The fortified shrine cities were the focus of conflict between landless Habiru and the Habiru who ruled in the cities. The fortifications were built by the rulers of Canaan, whose cultural complexion was similar to Egypt.

The Anakim were organized into a three-clan confederation. The three clans were named for the three highest ranked sons of Anak. Their names are Sheshai (Shasu), Ahiman and Talmai (Josh.15:14). The Shasu were devotees of YHWH before the time of Moses and kinsmen of the Edomites whose rulers are listed in Genesis 36.

Anak and his people the Anakim dwelt in the region of Hebron, where Sarah resided. Anak's father was Arba. Hebron was called Kiriath-Arba. The Anakim are associated with the Nephilim (Num. 13:33), with the Raphaim (Deut. 2:10) and with the clan of Caleb (Josh.15:13). Therefore, Caleb’s offensive against the Anakim was a war against some of his kinsmen.

If this sounds like a distortion, check the archaeological, linguistic, and anthropological data surrounding Hazor's destruction.

Israel and Judah play a large role in the biblical accounts because the Bible focuses on the peoples who lived there, some of whom were the ancestors of Jesus Messiah.

As the presentation points out, "some of these conflicts didn't have the results that the Bible claims." Here's a look at twelve battles mentioned in the Bible. (Note that the terms Israel, Israelite and Jew are not always applied accurately.)

Related reading: Hazor's Destruction: Another Theory; The Men Who Spied on Canaan; Hebrew, Israelite, or Jew?