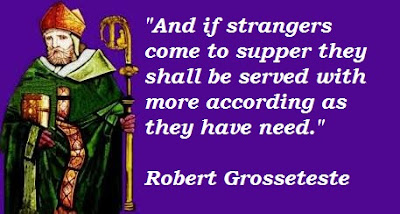 In many ways, Robert Grosseteste (1168-1253) is the epitome of the high Middle Ages. He was a philosopher, theologian, mathematician, and scientist. In his role as a churchman, he was known for three beliefs: (1) the supreme importance of the cure of souls, (2) a centralized and hierarchical church structure, and (3) the superiority of the church over the state.

Born of humble parents at Stradbroke in Suffolk, he became Chancellor of Oxford University (c.1221) and Bishop of Lincoln in 1235. He served in the latter office until his death in 1253. Using the authority of his office, Grosseteste attempted to stop corruption among his clergy and urged them to be content with their incomes from the parishes they served and not to "double dip."

In his position as Chancellor of Oxford University he encouraged the tendency to conservative metaphysics as well as empirical studies. Frederick Copleston writes, "the combination of these two factors would afford some reason for tracing the course of philosophy at Oxford from Robert Grosseteste to Roger Bacon in a continuous line." (A History of Philosophy, Medieval Philosophy, Vol. II, p.228)

Grosseteste's philosophical and theological approach blended elements of Aristotelian and Augustinian Neoplatonism. During the Renaissance of the 12th century, ideas on scientific method, including Aristotle's works and the experimental approaches of Alhazen and Avicenna, were introduced to Europe through Latin translations of Arabic and Greek texts. These Latin translations provided Grosseteste with the sources he needed to grasp Aristotle's approach to understanding the world.

Grosseteste sought rational explanations of natural phenomena and patterns in creation. He wrote a commentary on the Genesis creation account called the Hexaemeron (following the work of St. Basil by the same title). Grosseteste's Hexaemeron combines the learning of East and West in a manner consistent with early English rationalism.

Grosseteste worked on geometry, optics, and astronomy. He experimented with mirrors and lenses. In his De Natura Locorum he provides a diagram which shows light being refracted by a spherical glass container full of water. In his work De Iride he writes:

This part of optics, when well understood, shows us how we may make things a very long distance off appear as if placed very close, and large near things appear very small, and how we may make small things placed at a distance appear any size we want, so that it may be possible for us to read the smallest letters at incredible distances, or to count sand, or seed, or any sort or minute objects.

Grosseteste realized that the hypothetical space in which Euclid imagined his figures was the same everywhere and in every direction. He then postulated that this was true of the propagation of light. He developed his ideas on light in the treatise De Luce.

Grosseteste's written works include a commentary on Aristotle’s Posterior Analytics and Physics, treatises on scientific subjects, and commentaries on the Bible. His commentary on the Posterior Analytics places him among the first European thinkers to understand Aristotle's vision of the dynamic nature of scientific reasoning. This vision involves concluding from particular observations into a universal law, and then from universal laws to prediction of particulars. Grosseteste called this "resolution and composition" and he insisted that both paths should be verified through experimentation. In this, he prepared the way for Francis Bacon and the development of the scientific method.

In the Questiones altere super libros prime philosophie Aristotelis, Bacon develops Grosseteste's treatment of knowledge, science, and intuition. Bacon articulated something that Grosseteste believed, namely that knowledge of scientific principles is innate because “by nature we argue and demonstrate and prove without labor, but to argue and demonstrate are modes of knowledge.” Bacon's account of sense, memory, and experience is more systematic than that of Grosseteste's Commentary, but it clearly owes much to Grosseteste.

Grosseteste was interested in empirical science and this excite the interest of Francis Bacon who said of Grosseteste that he knew the sciences better than any man (Bacon, Opus Maius, ed. Bridges, I, p. 108) and was able to explain causes by the aid of mathematics (Ibid., p. 472).