Theories About the Cambrian Explosion

Cambrian-Ordovician rock succession at Shingle Pass in the Egan Range of Nevada. The SPICE carbon isotope event is in Late Cambrian strata at the far left, and the succession becomes younger into the Middle Ordovician toward the right. Plankton and animal biodiversity increases from the Cambrian to the Ordovician (left to right). Image Credit: Dr. Matthew R. Saltzman, Ohio State University

The Cambrian period, from 542 to 488 million years ago, is the subject of great interest to earth scientists, botanists, and biologists. The Cambrian explosion saw a relatively sudden increase in organic diversity. Different theories exist as to what triggered the change.

One explanation involves the increase in atmospheric oxygen about 500 million years. According to this theory, photosynthetic plankton pulled carbon dioxide out of the atmosphere and released large amounts of oxygen, creating an atmosphere that we would consider breathable.

The evidence is found in rock fossils called acritarchs. Rock samples containing these fossils preserve an indirect record of oxygen amounts in the form of carbon isotopes. Isotopes of an element have the same number of protons but different numbers of neutrons. There are two stable carbon isotopes in nature: the most common, C-12, has 6 protons and 6 neutrons; but about 1.1 percent is C-13, with 6 protons and 7 neutrons. In an atmosphere with high levels of oxygen, photosynthesis within plankton favored carbon-12 over the heavier carbon-13, a signature that was preserved in the fossil record.

The Cambrian period also was marked by extinction events. One explanation for the extinction involves a condition called anoxia where the ocean's oxygen levels drop dramatically, causing many organisms to die. This event, known as the Steptoean Positive Carbon Isotope Excursion (SPICE), was characterized by the burial of large amounts of organic matter on the ocean floor. 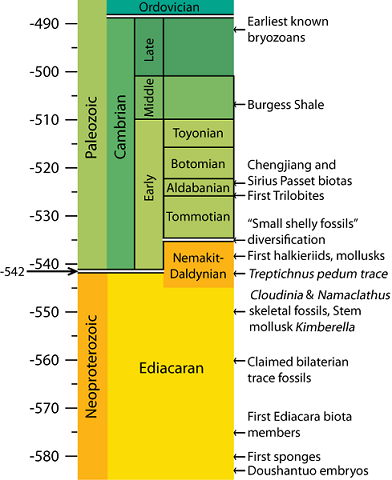 Recently, a team from the University of Exeter's Global Systems Institute proposed a theory involving plate tectonics. According to this theory during the formation of the supercontinent there was an increase in continental arc volcanism. Long chains of volcanoes formed where continental and oceanic tectonic plates collided. This led to the increased release of CO2 from ancient, subducted sedimentary rocks. The Exeter team calculated an increase in atmospheric CO2 and warming of the planet, which in turn amplified the weathering of continental rocks. This process supplied phosphorus to the ocean to drive photosynthesis and oxygen production.

Clearly, the factors that led to a habitable Earth and organic diversity are complex. Many questions remain to be answered. One wonders how an increase in oxygen levels explains the emergence of bilateral symmetry in those early living organisms? Why that characteristic and not some other?

In the Precambrian organisms we find neither bilateral symmetry nor any bivalves. The potential for greater diversity and complexity seems to coincide with the appearance of binary features. Too little attention is given to such signals or triggers in the fossil record.

The unity of organic life can be explained by several paradigms. Evolutionary processes, divine supervision and intervention, Earth's physical forces, etc. In science we must go with the paradigm or hypothesis that best aligns with the physical evidence. The appearance of bilaterally symmetric invertebrates in the latest Precambrian Ediacaran suggest that bilateralism was a precursor to greater complexity and hierarchies. Consider how binary language used in computer science has led to great complexity. Random sequences degrade. Binary features and binary sets increase complexity.