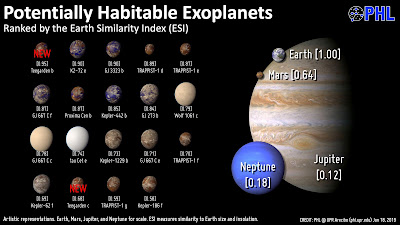 An international research team led by the University of Göttingen has discovered two new Earth-like planets near one of our closest neighboring stars. "Teegarden's star" is only about 12.5 light years away from Earth and is one of the smallest known stars. It is only about 2,700 °C warm and about ten times lighter than the Sun. Although it is so close to us, the star wasn't discovered until 2003. The scientists observed the star for about three years. The results were published in the journal Astronomy and Astrophysics.

Their data clearly show the existence of two planets. "The two planets resemble the inner planets of our solar system," explains lead author Mathias Zechmeister of the Institute for Astrophysics at the University of Göttingen. "They are only slightly heavier than Earth and are located in the so-called habitable zone, where water can be present in liquid form."

Despite its proximity, this nearby Teegarden's star was only discovered back in 2003. About ten times lighter than our own Sun and one of the smallest stars we know of, the old red dwarf, which is roughly 8 billion years old, has proved a challenge to research.

According to the team, other planetary systems around similar stars have always been detected using the transit method, when an orbiting planet passes in front of a star, blocking Earth's view and causing the bright celestial object to darken for a brief moment.

The alignment and dimness of Teegarden wouldn't lend itself to this method however, so astronomers instead used the CARMENES next-generation telescope designed specifically for such situations. Located at Spain's Calar Alto Observatory, the instrument allowed the researchers to look for any changes in the mini-star's radial velocity.