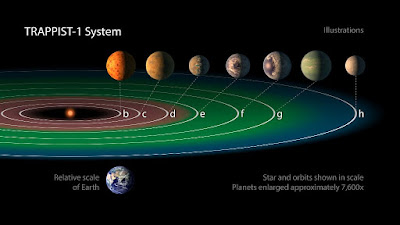 TRAPPIST-1 (2MASS J23062928-0502285) is an ultra-cool dwarf star located about 40 light-years from Earth in the constellation Aquarius. With our present technology it would take about 700 years to travel there.

TRAPPIST-1 will provide scientists with data that will help them to better understand the formation of solar systems. Orbiting this star are seven rocky planets about the size of Earth. The exoplanets orbit in tight circles around their sun.

Astrophysicists believe that the levels of radiation may be low enough for organisms to exist in this system. They speculate that there might be water. However, it takes more than water for a planet to be habitable. The planet also needs a magnetic field strong enough to protect life from radiation and solar winds.

Amaury Triaud, of the Institute of Astronomy at the University of Cambridge in England, told reporters on February 21, "We can expect that, within a few years, we will know a lot more about these planets, and with hope, if there is life there, [we will know] within a decade."

The research team, led by Michaël Gillon of the University of Liège in Belgium, studied the star using the TRAnsiting Planets and PlanetesImals Small Telescope (TRAPPIST), located at the La Silla Observatory in Chile. This is how TRAPPIST-1 received its name.


Watch this NASA video to learn more about TRAPPIST-1.