The Arrogance of Scientism 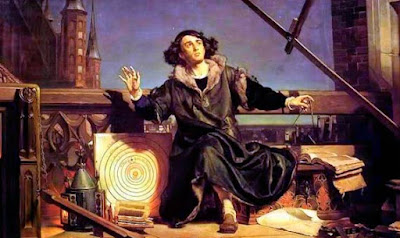 Paul M. Sutter is an astrophysicist at The Ohio State University. Sutter also hosts Ask a Spaceman, RealSpace, and COSI Science Now. What follows is an excerpt from a piece Sutter wrote titled Going Bananas: The Real Story of Kepler, Copernicus and the Church.

In modern times we neatly separate science, philosophy and religion into their nice tidy little boxes, and get annoyed when members of one box start talking about the contents of another domain. And we view the history of science as proto-scientists fighting against the Church to leave them in peace and let them do their science-y thing.

However, there are two important things to remember when looking at the early history of science around the time of Copernicus and Kepler:

1) What we now call science, philosophy and theology were all mixed up together.

2) Early (proto-)scientists made claims and arguments that would sound totally bananas today.

I'll leave Copernicus' motivations to another article, but he did indeed publish a book in 1543 detailing his new cosmology with the sun at the center of the universe. While it did have some advantages over the en vogue geocentric model (like neatly explaining the precession of planetary orbits and requiring fewer circles-within-circles), it did have weaknesses (how, exactly, does something like the Earth move?), and the reaction among the literate community — including the Catholic clergy — was neither hostile nor supportive. At the time, the cosmology of Copernicus simply wasn't very compelling.

A generation later, Kepler penned a work in defense of the Copernican model, but not on physical or mathematical grounds — Kepler's argument was religious. He said that since the son of God was at the center of the Christian faith, the sun ought to be at the center of the universe. Ergo, heliocentrism.

Three comments on the excerpt from Sutter:

Let us examine Sutter's assertions and see whether they hold up to historical and scientific fact.

1. If we want to grasp the full history of science, we must begin my looking at the contributions of the ancients. Sufficient historical, anthropological and archaeological evidence exists to justify the hypothesis that astronomy, mathematics, medicine and mummification, binary thought and triangulation (pyramids), metal work, mining technologies, cultivation techniques, animal husbandry, the earliest priestly writings, and the earliest known trade records are found among the Nilo-Saharans.

Plato wrote that Nilotic scribes had been keeping astronomical records for 10,000 years. He should know since he studied with a priest in Memphis for 13 years, and knew about Earth's Great Year. This is the time of between 25,000 and 28,000 years that it takes for Earth to complete the cycle of axial precession. This precession was known to Plato who defined the "perfect year" as the return of the celestial bodies (planets) and the diurnal rotation of the fixed stars to their original positions. The ancients understood much more than we moderns recognize.

By 4245 BC, the priests of the Upper Nile had established a calendar based on the appearance of the star Sirius. Apparently, they had been tracking this star and connecting it to seasonal changes and agriculture for thousands of years. The priest Manetho reported in his history (c. 241 BC) that Nilotic Africans had been “star-gazing” as early as 40,000 years ago.

None of the advancements listed above can be positively identified with a single individual. Instead they are connected to the efforts and interests of great rulers and their scribes, priests, metal workers and architects.

2. This look at the early foundations of science and technology should cause one to feel admiration for the achievements of the ancients. It does not give us reason to perceive of their achievements as "totally bananas." That appears to be a expression of Sutter's chronological snobbery. It reveals a mindset that sees an idea, way of thinking, culture, art, or science of an earlier time as inferior, based solely on the assumption that whatever is newer is better.

A corollary to this is the oft-cited theory that theology and religion emerged because people who lived before the time of science needed to explain natural phenomena; the implication being that we no longer need religion now that we have science. Theology and religious impulses are dismissed as superstition.

As the late Dr. Austin L. Hughes has said, "Scientism is taking the mantle of science and claiming for it an authority that it doesn't have."


3. Sutter holds his fellow astronomer Johannes Kepler in contempt because of his Christian faith which traditionally links the Son of God with the solar symbolism of the biblical Hebrew. Perhaps Sutter is unaware that solar language is commonly used in the Messianic Faith known as Christianity. The Sun was a widely venerated sacred symbol of the High God and His Son among Hebrew and Christian writers. Here is a description of Messiah as the "true sun" in Gildas' De Excidio et Conquestu Britanniae:

Meanwhile, to the island stiff with frost and cold, and in a far distant corner of the earth, remote from the visible sun, He, the true sun, even Christ, first yields His rays, I mean His precepts. He spread, not only from the temporal firmament, but from the highest arc of heaven beyond all times, his bright gleam to the whole world in the latest days, as we know, of Tiberius Caesar. At that time the religion of Christ was propagated without any hindrance, because the emperor, contrary to the will of the senate, threatened with death informers against the soldiers of that same religion.


The sad thing about arrogance is that it makes a person unteachable and the unteachable are quickly found to be ignorant of many things. Humility opens the door to knowledge and true wisdom.

Heed the words of the prophet: "Surely the day is coming; it will burn like a furnace. All the arrogant and every evildoer will be stubble and that day that is coming will set them on fire. But for you who revere my name the sun of righteousness will rise with healing in his wings." (Malachi 4:1,2)