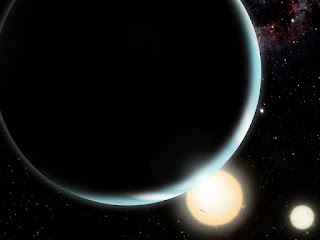 An artist's rendering of Kepler-34b, an exoplanet believed to orbit two stars.
Credit: David A. Aguilar, Harvard-Smithsonian Centre for Astrophysics

It has been 85 years since the discovery of the planet Pluto, and astronomers want to find a new planet by looking for a pulsar. A pulsar is a highly magnetized, rotating neutron star or white dwarf, that emits a beam of electromagnetic radiation.

By carefully observing the light from a distant star, astronomers can detect the changes in the wavelengths of light called redshifting and blueshifting. They detect an exoplanet by observing over years the orbital wobble the occurs due to gravitation pull between the planet and the star.


"HARPS" stands for "High-Accuracy Radial velocity Planet Searcher." A spectrograph splits the light from a star into its wavelengths or colors, similar to the way a prism splits wavelengths and produces a colorful array. Chemical elements absorb light of specific colors, leaving dark lines in the star's spectrum. Those lines wobble slightly due to the gravitational tug of an orbiting planet on its parent star.

There are 5 ways to find an exoplanet. They are described in this NASA presentation.