Medical Care in the Ancient World 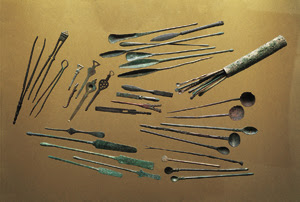 
These tools would have belonged to priest-physicians, as medicine in the ancient world was the work of these specialists. The sick were brought to them at the temples and shrines, and some temples and shrines were especially famous places of healing.

Plants and minerals were used to prepare ointments and medicines for disorders ranging from indigestion to headaches. Bees wax and honey were used to seal wounds as these help to prevent infection. The Nubians laced their beer with the antibiotic known today as tetracycline.

Surgical procedures are described in the Edwin Smith papyrus, the world's oldest known surgical document (c. 1600 BC). It is written in the hieratic script and gives detailed descriptions of anatomy, diagnosis, treatment, and prognosis of forty-eight types of medical problems. It describes closing wounds with sutures, preventing and curing infection with honey and moldy bread (both known to contain antibiotics), application of raw meat to stop bleeding, and treatment of head and spinal cord injuries.

Another papyrus that describes medical treatments is the Ebers Papyrus (1550 B.C.). One of the remedies described in this papyrus is medicinal clay made from red and yellow ochre. The Ebers papyrus has a treatment for asthma. The patient was to sit over a mixture of herbs heated on a brick and inhale the fumes.


It appears that the priest-physicians specialized. Writing in the first century B.C., the Greek historian, Diodorus Siculus, observed: "The study of medicine with them was divided between specialists; each physician attending to one kind of illness only. Every place possessed several doctors; some for diseases of the eyes, others for the head, or the teeth, or the stomach, or for internal diseases." (Bibliotheca historica, i. 91)

Diodorus Siculus also reports that there were embalming specialists at the temples and shrines. "The men called embalmers, however, are considered worthy of every honour and consideration, associating with the priests and even coming and going in the temples without hindrance, as being undefiled." (Lacus Curtius, p. 313). The embalmers used palm wine, cedar oil, myrrh, and cinnamon.

There is evidence that some of the healer-priests practiced dentistry. Below is an image of a 2.5 millimeter wire in this tooth’s canal. This was discovered in a grave at Horvat En Ziq, a Nabatean fortress in the northern Negev. The incisor contains a bronze wire filling, dating to about 200 B.C. 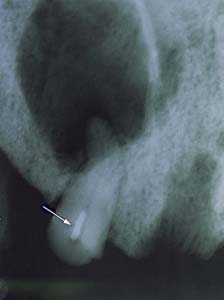 The teeth of people buried roughly 2,000 years ago in an ancient cemetery called Al Khiday 2 had surprisingly few cavities, abscesses, or other signs of tooth decay. Researchers found that these people were cleaning their teeth with Purple Nutsedge, a weed that has antibacterial properties. It appears that this was medical knowledge received from their ancestors. People buried at Al Khiday 8,700 years ago also consumed the Purple Nutsedge tubers.

Email ThisBlogThis!Share to TwitterShare to FacebookShare to Pinterest
Labels: medicine