"Why has not anyone seen that fossils alone gave birth to a theory about the formation of the earth, that without them, no one would have ever dreamed that there were successive epochs in the formation of the globe." -- Georges Cuvier, Discourse on the Revolutions of the Surface of the Globe


Mary Anning (1799-1846) has been called "The Greatest Fossilist" in the world. She explored the cliffs of Lyme Regis in Dorset, England, where she collected fossils. She spent more than 30 years collecting and describing fossils found mostly in rocks of the Jurassic age. Anning discovered fossils that she later described as a plesiosaur, an early marine reptile. The discoveries of Anning and the French naturalist, Georges Cuvier, provided a better understanding of organic life in the Jurassic age.

If  Mary Anning is the "mother" of paleontology, Georges Cuvier is certainly the "father" of paleontology. Besides their love of fossil hunting, they shared the Christian Faith. Both made important discoveries and confronted opposition based on limited religious beliefs. Anning faced a challenge from Christians who believed that the earth is only about 6000 years old. She considered that many of the fossils she found were older than 10,000 years. Anning’s work helped to change the way people thought about prehistoric life on Earth.

Georges Cuvier proposed that there had been an "age of reptiles" before the time of mammals. This idea of earth’s organic life changing over time presented a challenge to the Young Earth Creationism of the churches in Cuvier’s time. Cuvier was a Lutheran who regarded his faith as a private matter. He supervised government educational programs for Protestants in France and was instrumental in founding the Parisian Biblical Society in 1818. From 1822 until his death in 1832, Cuvier was Grand Master of the Protestant Faculties of Theology of the French University in Paris.

Cuvier served in Napoleon's government and served under three successive Kings of France. He was knighted and made a Baron and a Peer of France. He was respected for his devotion to science. His contribution to understanding vertebrate and invertebrate zoology and paleontology is significant. 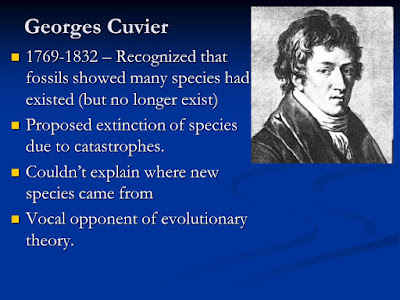 Cuvier is credited with demonstrating the reality of extinction over time. However, he did not believe extinction confirmed Darwin's evolutionary theory. Instead, he believed that all species were created around the same time in the past and that some species became extinct due to natural causes such as environmental catastrophes.