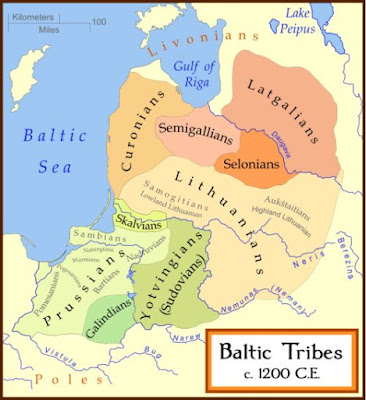 Religious artifacts have been found buried under a primary school in the Lithuanian capital of Vilnius. These were found in the ruins of a 400-year synagogue. Archaeologists knew where the synagogue was located, but the site was not examined until 2015 when ground-penetrating radar was used to pinpoint the building's underground ruins.

Vilnius became a major Jewish city in the 14th century when the Lithuanian king gave Jews permission to settle there.The original synagogue was built of wood, but later the entire city was rebuilt in brick, including the famed Great Synagogue. The prestige of this synagogue was such that Vilnius was called the "Jerusalem of Lithuania."

After a 1748 fire, the synagogue was rebuilt, but city authorities did not want the synagogue to tower over the churches, so parts of the synagogue were built below street level. This is why it is preserved today.  Read more here and here.

The first Lithuanians were called "Balts" after the Baltic Sea. The oldest settlements were near the Sea. Early humans were moving through the Baltic region as evidenced by the discovery of Stone Age grave goods found in Gyvakarai (Kupiškis district) and Biržai, Lithuania.

Hundreds of mummified human remains have been found buried in a crypt of the Dominican Church of the Holy Spirit in Vilnius. For most of their history, the corpses were preserved intact by the cool temperatures and ventilation in the underground chamber. These mummies have been studied by medical researchers to gain a better understanding of the health of the residents during the Middle Ages. Read more here.

Related reading: 17th Century Smallpox Retrieved From Mummy in Vilnus: In Search of the Jerusalem of Lithuania

Posted by Alice C. Linsley at 1:05 PM No comments:

Links for ASA and ASA 2019 Conference


Catch the livestream of plenary talks and the State of the ASA here:
https://www.youtube.com/channel/UC2QNJOvMjFVWaDFtT9VJG4w


View the schedule for ASA 2019 Conference at Wheaton College here:

Last month Facebook blocked sharing anything from this blog because an anonymous grumpy head reported it as abusive. The original message I received was that content at the blog is abusive and violates community standards. Now I'm told that the complaint involves spamming. It appears that someone or some group does not like what we are doing here.

I manage the blog for Christian Women in Science (CWIS) and am careful about moderating comments and content. We have never spammed our posts. This is an educational blog with balanced content representing good science.

I am glad that Facebook is going to review the claim. However, one month later, we are still blocked from posting our URL on Facebook. Try posting a link to this at your Facebook page. When Facebook blocks it, ask for a review. Perhaps if more people ask, we might have this matter resolved.

The CWIS blog was set up six years ago as a resource for Christian School teachers and home school parents seeking solid resources to teach STEM and the history of science and technology. It is entirely informational and represents a range of scientific positions. That is evident from a quick review of the INDEX.

CWIS is an organization I helped to found and this blog was set up with the permission of the CWIS Board. CWIS is an affiliate of the American Scientific Affiliation.

Please share this post with teachers and home school parents in any way that you can: email, Twitter, etc. It also would help if you would become a "Follower" of the blog. Stay informed about STEM and Technology through the monthly posts.

Old World Migrations to the Americas 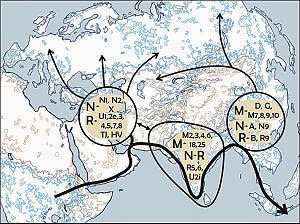 Migrations out of the Upper Nile Valley

It has been suspected that native populations of the Americas arrived from different points of origin. Some came via a land bridge from Siberia. Some may have come to South America from Africa, and some came from Northern Europe via Greenland and Labrador.

Paleoanthropologists have established a clearer picture of the connection between the ancestors of modern Siberians and some Native Americans using DNA.

Linguists have verified a connection between the Siberian language Ket and the language of the Navajo.

According to the oral tradition of the Miqmac of Eastern Canada, they came in two waves from the Middle East to Scandinavia, then to Greenland and to the Hudson Bay area. They are in Haplogroup X2b5, which traces the maternal line (Mitochondrial DNA).

This is a different route of migration than that taken by other Old World peoples coming to North America across Eurasia and the Bering Strait. When it comes to mtDNA haplogroup X, there is no genetic trail across Eurasia. The dispersion of Haplogroup X is shown below. The greatest concentrations are indicated by the darker shade. MtDNA traces lineage by the mitochondria, received from mothers. 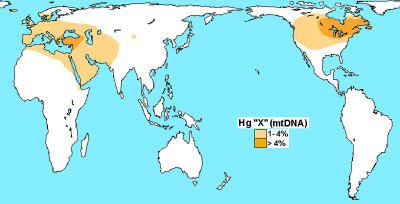 Only 7% of the Dene (Navajo) are in Haplogroup X, yet their language is related to Ket, a Yeniseic language spoken by a small Siberian population. This suggests that point of origin, genetic inheritance, and the language spoken must be analysed as separate features when studying a population.

To gain a better understanding of old world migrations into the Americas, scientists must draw on several disciplines, including DNA analysis, archaeology, linguistics, and anthropology.

Posted by Alice C. Linsley at 9:00 AM No comments: