Fresh Water Aquifers in the Atlantic 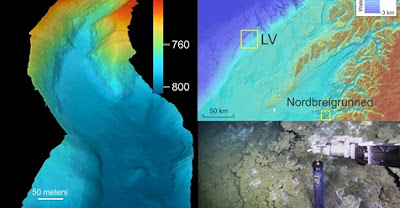 Fresh water was discovered at 800 meters below the surface in two small canyons on the continental slope outside Lofoten, Norway.

"When we the found fresh water leaking from the seabed, we were very surprised," explains marine geologist Wei-Li Hong at the Geological Survey of Norway (NGU).

The leakage likely originated from a large pocket of fresh water, otherwise known as an aquifer, hidden beneath the sediment of the seabed, a remnant of the last Ice Age. The thick ice caps that enveloped Norway pushed down on the crust of the Earth with tremendous force, squeezing large amounts of melt water down through cracks in the seabed.

Marine geologist Jochen Knies reports, "It’s the exact same phenomenon that we have here in Norway."  Knies is the NGU project manager.