The Ring of Fire 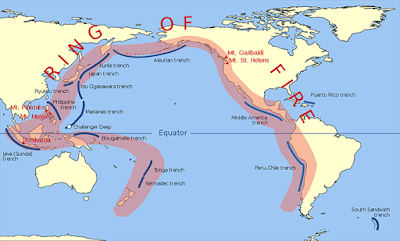 "The Ring of Fire" is an apt name for the belt around the Pacific Ocean’s edge where movement of the Earth's plates causes frequent earthquakes and volcanic eruptions. The zone is also called the "Circum-Pacific Belt."

The majority of Earth’s volcanoes and earthquakes take place along the Ring of Fire. The region is prone to the destructive force of tsunamis.

The Ring of Fire stretches about 24,900 miles (40,000 kilometers) and approximately 90% of earthquakes occur in this zone.

In most places the seismic activity is due to subduction. As rock is subducted, it melts and becomes magma. So much magma near Earth’s surface creates the perfect conditions for volcanic activity.

An exception is the border between the Pacific and North American Plates. In this stretch of the Ring of Fire the plates move sideways past one another. This "transform boundary" generates a large number of earthquakes as tension in Earth’s crust builds up and is released.