The Lord by wisdom hath founded the earth; by understanding hath he established the heavens. By his knowledge the depths are broken up, and the clouds drop down the dew. (Proverbs 3:19, 20)

Scientists have identified 10 main factors that influence Earth's climate. They are shown on this chart.

In this article, we consider the effect of volcanic eruptions on climate. We also explore the way in which volcanism produces new islands, a phenomenon that was observed by ancient peoples.

Volcanism is the process by which land is created through the release of molten magma from the earth's core. Submerged volcanoes are known as seamounts. When underwater volcanoes erupt, the lava erupts to form an undersea ridge. Layers of lava build until a ridge breaks the sea's surface to form an island. This process produces sediment and rock.
Volcanism takes place both above and below the Earth's surface. When molten lava reaches the surface geologists say that it is extrusive volcanism. When molten magma cools and hardens beneath the surface of the Earth, it is called intrusive volcanism. Molten magma that cools and hardens deep beneath the surface of the Earth is called plutonic volcanism.

The young earth had many active volcanoes. Some were above the surface (extrusive) and others were beneath the surface (intrusive). Many volcanic eruptions took place under the sea. According to Genesis 1 God separated the dry land from the sea as one of the first acts of creation. We can imagine a great sea with steam rising from deep underwater fissures in the earth. Now imagine volcanoes rising up from the sea.

When volcanic islands emerged from the sea they were battered by wind and tidal wave action that caused the peaks to erode and the land to spread.


The oldest descriptions of the first dry land

The emergence of dry land from a cosmic sea is described in the oldest religious narratives. One of the oldest creation accounts is found among the ancient Egyptians. They envisioned the first place in the world as a mound emerging from the waters of a universal ocean. Here the first life form was seen as a lily, growing on the peak of the primeval mound. The emerging mound was named TaTJaNuN, a reference to TT (twin peaks) and nun (water). TTJNN likely means the "pillars of God in the water" and is a reference to volcanic peaks emerging from the universal ocean.  I Samuel 2:8 states that these "pillars of the earth" belong to God. (Also see Psalm 75:2,3; and Job 9:6.)

Sumerian commercial records, the Egyptian Coffin Texts, and the Hebrew Scriptures all point to the belief of the ancient Afro-Asiatic peoples that the dry land earth emerged from a watery chaos. In the Coffin Texts we read these words from the Creator, "I was the one who began (everything), the dweller in the Primeval Waters. First Hahu emerged from me and then I began to move."

Ha-hu is the wind that separated the waters above from the waters below and caused the erosion of the dry land so that it spread out. In Hebrew the Spirit that moved over the water at the beginning (Gen. 1) is called ruach, and ruach also means breath or wind. It is equivalent to the ancient Akkadian En-Lil, meaning Lord Wind. 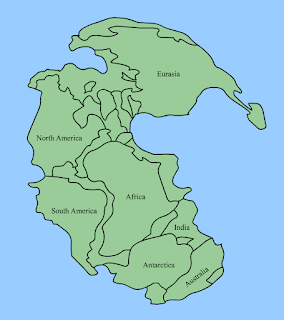 This conception of how the dry land was formed was carried into lands where the Proto-Saharan Nilotic rulers established territories. This includes Mesopotamia and parts of India and Pakistan. In Hindu and Buddhist mythology the mound that rose from the sea is called Mount Meru. It emerged from the center of the Cosmic Ocean and according to the Hindu cosmology, the Sun and 7 visible planets circled the emerging mountain.

The gases and dust particles spewed into the atmosphere during volcanic eruptions influence climate by shading the planet from solar radiation. Depending on the eruption the cooling effect can last for months or years.

Rain can clear the particles from the air, but the rain sometimes has a toxic effect on plants, animals, and water systems.

Many of the minerals that are needed by the human body for good nutrition come from volcanic dust that is dispersed across the earth's surface. Volcanic deposits can develop into some of the richest agricultural lands on earth. Crops planted in volcanic soil are nutrient rich. Volcanic ash slowly releases nutrients that the human body needs to be healthy.

Related: Watch this video of a volcanic eruption in Hawaii.