The Life and Faith of George Washington Carver


How far you go in life depends on your being tender with the young, compassionate with the aged, sympathetic with the striving and tolerant of the weak and strong. Because someday in your life you will have been all of these.--George Washington Carver

George Washington Carver was born into slavery and yet he became one of America’s leading scientists and inventors.

He was born in Diamond, Missouri, around 1864. The exact year and date of his birth are unknown. A week after his birth, George was kidnapped, along with his mother and sister, from the Moses Carver farm by raiders from Arkansas. The three were sold in Kentucky. Only the infant George was located by and returned to Missouri.


Carver became one of the most prominent scientists of his time, as well as a teacher at the Tuskegee Institute. He found over 300 uses of the peanut, including dyes, shampoo, shoe polish, plastics and gasoline. In 1920, Carver delivered a speech before the Peanut Growers Association, attesting to the wide potential of peanuts. The following year, he testified before Congress in support of a tariff on imported peanuts. With the help of Carver's testimony, Congress passed the tariff in 1922.

Carver became a recognized authority on cotton, the peanut, and the sweet potato. His name appears in "Who's Who in America," and he was accorded a membership in the Royal Society of London. 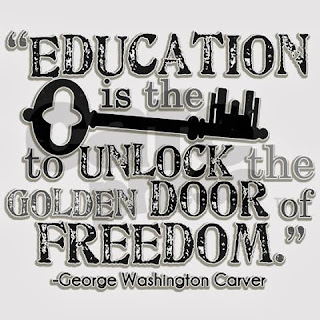 Carver applied for admission to a Presbyterian college in Highland, Kansas. One day he received a letter announcing his acceptance to Highland College. That fall he eagerly arrived on campus, but the dean said, "You didn't tell us you were a Negro. Highland College does not take Negroes." Instead of attending classes, he staked a land claim and conducted biological experiments. He also compiled a geological collection.

Carver was equally interested in the arts. In 1890, he began studying art and music at Simpson College in Iowa. He developed into a skilled painter and his sketches of botanical samples were so outstanding that one of his teachers urged Carver to enroll in the botany program at the Iowa State Agricultural College.

At age 30, Carver graduated from Iowa State with the degree of Bachelor of Science in Agriculture in 1894. He was put in charge of the college greenhouse and the bacterial laboratory work in systematic botany. During this time, he worked toward a Master of Science degree, which was awarded in 1896.

Around this time Carver made the acquaintance of Booker T. Washington, the Head of the African-American Tuskegee Institute in Alabama. Recognizing Carver’s brilliance, Washington hired Carver to run Tuskegee’s agricultural department in 1896.

Carver taught at the Tuskegee Institute for 47 years. His work at Tuskegee included groundbreaking research on plant biology that brought him to national prominence. Many of his early experiments focused on the development of new uses for crops such as peanuts, sweet potatoes, soybeans and pecans.

In 1928, Carver was awarded an honorary doctorate from Simpson College in Indianola, Iowa.


The Years at Tuskegee

While at Tuskegee, Dr. Carver taught Sunday classes. This started in 1906 when a number of students asked him to teach them the Bible on Sundays. In a grand narrative style, he taught by impersonating Bible characters. The story is told that he astonished his class when recounting the story of how God fed the Israelites in the wilderness. He produced a handful of “manna” that he had collected in the woods near Tuskegee.

He taught Bible classes for many years and influenced the lives of numerous African American young people. Among them was a young woman named Frances A. Smallwood who was the second African American nurse in the US public health service. She earned two degrees from Tuskegee. Frances’ father also worked at the Tuskegee Institute, now called Tuskegee University.

Carver had a good relationship with his students. He encouraged his students to collect specimens of plants and insects because, as he wrote in 1902, “The study of Nature is both entertaining and instructive… it encourages investigation and stimulates originality.” His students thought that it would be funny to trick him with a “new” bug. They took parts from several different insects and assembled their own bug and asked him to identify it. Carver saw through the trick and called it a “humbug.”

One day, upon returning home from Tuskegee, Carver slipped and fell down a flight of stairs. A maid found him unconscious and took him to a hospital. Dr. Carver was confined to his bed as his health continued to fail. He was extremely weak due to acute anemia. He died January 5, 1943 at age 78. He buried next to Booker T. Washington at Tuskegee University. 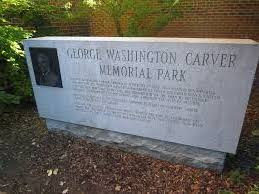 Before Carver died, Missouri Senator Harry S. Truman launched a project to erect a national monument in Carver's honor. The bill passed unanimously in both houses.

After Carver died, President Franklin D. Roosevelt dedicated $30,000 for the monument. It was to be erected on the site of the plantation where Carver lived as a child, west of Diamond, Missouri. This was the first national monument dedicated to an African-American. The 210-acre memorial complex includes a statue of Carver as well as a nature trail, museum and cemetery.

In 1929 Dr. Carver received one of the three Roosevelt Medals for Outstanding Contribution to Southern Agriculture. 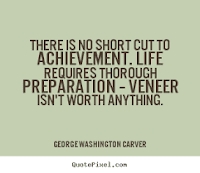 Carver appeared on U.S. commemorative postal stamps in 1948 and 1998, and a commemorative coin was minted in his honor between 1951 and 1954. Many schools are named for him, as are two U.S. military vessels.

In 2005, the Missouri Botanical Garden in St. Louis opened a George Washington Carver garden that includes a life-size statue of Carver.

George Washington Carver should be honored for his brilliance and tenacity. He should be remembered also as a man of profound Christian faith.

Carver was offered money and positions by such famous men as Thomas Edison, but he declined both fame and fortune. He declined $100 sent to him from a manufacturer in acknowledgment of one of his peanut discoveries that the manufacturer had put to use.

Carver was never interested in financial gain. He wanted his work to improve the quality of life for the thousands of struggling poor, particularly in the South. In a 1924 address to the annual meeting of the Women's Board of Domestic Missions of the Reformed Church, at the Marble Collegiate Church in New York, he said, "My discoveries come like a direct revelation from God.”

Regarding his prayer life, Carver explained:

My prayers seem to be more of an attitude than anything else. I indulge in very little lip service, but ask the Great Creator silently, daily, and often many times a day, to permit me to speak to Him through the three great Kingdoms of the world which He has created - the animal, mineral, and vegetable Kingdoms - to understand their relations to each other, and our relations to them and to the Great God who made all of us. I ask Him daily and often momently to give me wisdom, understanding, and bodily strength to do His will; hence I am asking and receiving all the time.