According to the U.S. Geological Survey Hawaiian Volcano Observatory the newly-formed lake inside Kilauea volcano is almost 130 feet deep, 880 feet long and 430 feet wide. The temperature of the water at the surface is now between 160 and 180 F, with temperatures beneath potentially higher. This makes the lake one of the world's hottest bodies of water. Scientists are using thermal cameras to monitor temperatures.
The water in the volcano's belly began to form a lake after the volcano erupted in 2018. In July 2019, helicopter pilots began to notice water pooling in the lowest part of the crater. Since then, water levels have risen steadily. Today, the lake has an area larger than five combined football fields. The water color is rust brown due to chemical reactions.
In May 2018, lava poured from fissures to the east, the lake swiftly drained and part of the caldera floor collapsed. This lowered the base of the volcano to the level of the water table. Don Swanson, at the U.S. Geological Survey’s Hawaiian Volcano Observatory explains, “We know that the crater floor dropped a little more than 70 meters below the water table in 2018. Any time that you punch a hole below the level of the water table, water is eventually going to come in and fill that hole.”
Kilauea has an explosive history. Now scientists are concerned about the possible effects of the water coming into contact with the magma. The magma could rise up the conduit and intersect with the lake, causing a steam explosion. Or the crater floor could collapse and the water drop to a zone where it would become steam. Either scenario is likely to produce a steam explosion.
Related reading: Deadly Lava Lake is Bubbling; Volcanic Eruptions and Climate
Posted by Alice C. Linsley at 6:43 AM No comments: 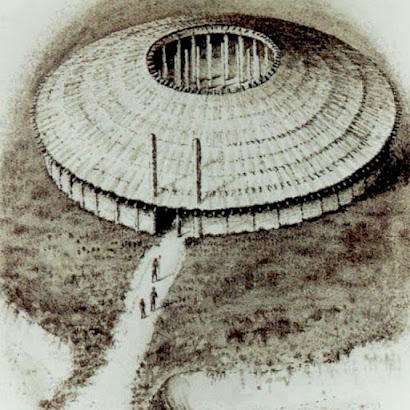 How Durrington Walls might have looked with this structure at the exact center.

Durrington Walls in the parish of Durrington, England is the site of a large Neolithic settlement and later henge enclosure located in the Stonehenge World Heritage Site. It lies 2 miles north-east of Stonehenge. Researchers have been studying ancient shafts there.
There are at least 20 shafts or pits that formed a circuit exceeding 1 mile (over 2 kilometers) in circumference. There is evidence that an inner post may have existed within the circuit of pits.
The circle of pits is much larger than any comparable prehistoric monument in the UK. The team of archaeologists estimates there may have been more than 30 post holes originally.
The researchers believe that one of the pits (5A) was recut during the Middle Bronze Age, suggesting that the site continued to be important long after the major period of development and modification of the henge at Durrington Walls.
Testing of the shafts indicates that they were dug more than 4500 years ago, around the time Durrington Walls and Stonehenge were built. The Late Neolithic was a period when ritual structures of an enormous scale were built in various parts of he world.
Source: A Massive Pit Structure at Durrington Walls
Posted by Alice C. Linsley at 9:05 AM No comments:

The human body is an extraordinary thing! It has intrigued scientists and fascinated painters and sculptors for thousand of years. As early as 3100 BC the ancient Nilotic priests were studying human anatomy in their efforts to heal the sick and injured. The Edwin Smith Papyrus is an example.
Today scientists have been talking about parts of the human anatomy that have become more evident through the use of advanced microscopy and imaging techniques.
The discoveries include the 2017 MRI evidence for lymphatic vessels in the human meninge, the membrane that covers the brain. These vessels drain fluids and removes waste from brain tissues. 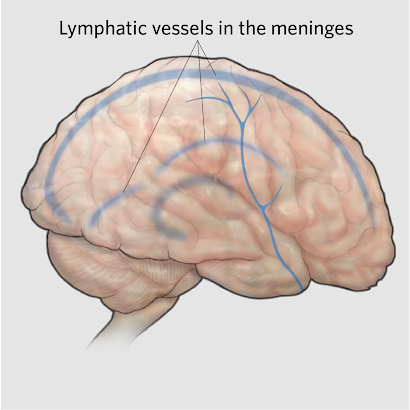