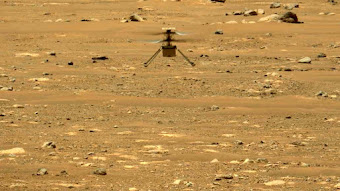 NASA's Ingenuity, a small robotic helicopter, made its first flight on Mars on 19 April, 2021. It took off vertically, hovered and landed successfully. Though it was airborne for less than one minute, the drone represents a significant engineering feat.

Getting airborne on the Mars is not easy due to the thin atmosphere. The helicopter was built of extremely light materials and the blades were set to rotate at over 2,500 revolutions per minute.
This flight demonstrated how oxygen (O₂) can be made from Mars' carbon dioxide (CO₂) atmosphere. A device called Moxie was able to generate 5g of O₂ - a sufficient amount of oygen for an astronaut on to breathe for 10 minutes.
Ingenuity has two cameras. A black-and-white camera points down to the ground and is used for navigation. A high-resolution colour camera looks out to the horizon.
The rotorcraft was taken to Mars in Nasa's Perseverance Rover, which touched down in Jezero Crater in February. 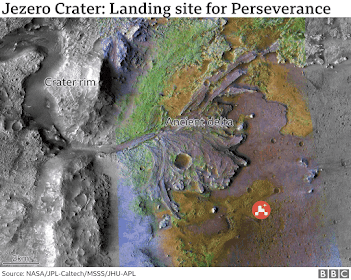 Confirmation of the successful first flight came via a Mars satellite which relayed the helicopter's data back to Earth.
Ingenuity made its second flight on Mars 22 April, expanding its flight operations as NASA considers more ambitious tests in the days ahead.
Related reading: Ingenuity Opens Way for Future Helicopter Flights on Mars
Posted by Alice C. Linsley at 7:41 AM No comments: