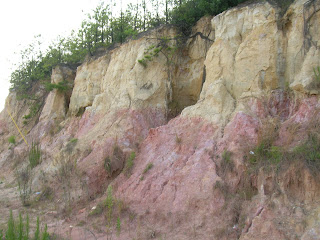 The Brunswick Magnetic Anomaly is a belt of volcanic rocks that formed around 200 million years ago at the time when the Atlantic Ocean took shape. The ribbon of rock is buried about 9 to 12 miles below the surface. It snakes from Alabama across Georgia, and offshore to North Carolina's Outer Banks.

It is believed that the Brunswick Magnetic Anomaly was created when the crusts of Africa and North America were yanked apart. As North America broke from Pangaea, deep troughs formed along the line of separation. These troughs filled with thick layers of coarse red sandstones, conglomerates, shales, and other nonmarine sediments. Similar sediment-filled troughs (called "rift valleys") occurred along North America’s east coast, from Georgia to Nova Scotia, Canada.

The Brunswick Magnetic Anomaly may mark the original collision zone between the African and North American plates. At least part of this belt of volcanic rock may represent a suture between the plates east of Georgia.