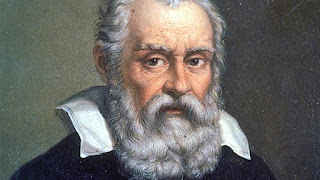 Galileo expressed his support of the Polish astronomer Copernicus who developed a cosmology with the sun at the center, the Earth rotating about a polar axis, and the Earth and planets circling the sun. Basically this is what we know of the solar system today.

Galileo shared some of these ideas and expressed views on the Bible in a letter to the Grand Duchess of Tuscany in 1615. In that letter Galileo wrote:  “I think in the first place that it is very pious to say and prudent to affirm that the Holy Bible can never speak untruth—whenever its true meaning is understood.”


Later this letter was used against him in his first Church trial and censure. The Roman Catholic tribunal directed Galileo to stop teaching the Copernican cosmology and forbid him even to discuss it.

In 1632, Galileo completed his Dialogue Concerning the Two Chief World Systems—Ptolemaic & Copernican. In this work he presented the arguments for and against the Copernican (solar centric) cosmology and the Aristotelian and Ptolemaic (geocentric) cosmology.

Galileo warned the Church hierarchs and theologians about the long-term effects of denying scientifically verified data. He wrote:

"Take note, theologians, that in your desire to make matters of faith out of propositions relating to the fixity of sun and Earth you run the risk of eventually having to condemn as heretics those who would declare the Earth to stand still and the sun to change position--eventually, I say, at such a time as it might be physically or logically proved that the Earth moves and the sun stands still."

The Roman Catholic Church did not heed Galileo's warning and about 350 years after Galileo, the Vatican issued an apology.

Email ThisBlogThis!Share to TwitterShare to FacebookShare to Pinterest
Labels: Galileo