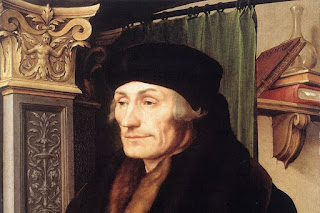 “There are some people who live in a dream world, and there are some who face reality; and then there are those who turn one into the other.”—Erasmus (1466-1536)

Desiderius Erasmus of Rotterdam was one of Europe's most famous and influential scholars. A man of great intellect who rose from meager beginnings to become one of Europe's greatest thinkers, he defined the humanist movement in Northern Europe. His translation to Greek of the New Testament brought on a theological revolution, and Erasmus was the dominant figure of the early humanist movement. Neither a radical nor an apologist, he remains one of early Renaissance controversial figures.

Erasmus rose from obscure beginnings to become one of the leading intellectual figures of the early Northern Renaissance. Most historians believe that he was born Gerard Gerardson in 1466 (with many noting his probable birthdate as October 27) in Rotterdam, Holland. His father, believed to be Roger Gerard, was a priest, and his mother was named Margaret, the daughter of a physician. He was christened with the name "Erasmus,"

He used his linguistic gift to help advance education and Biblical scholarship. He translated the writings of the Greek and Latin Church Fathers which made these writings accessible to educated people. He also wrote books of spiritual counsel in Latin, several of which were translated and reprinted in numerous other languages of Europe.

Erasmus's guides to interpretation that he wrote as prefaces to the 1516 and 1518 editions of the New Testament remain one of his most significant contributions.

The Adages of Erasmus is a compendium of wisdom sayings. Niccolo Sagundino wrote about the Adages:


“I can hardly say what a sweet nectar as honey I sip from your delightful Adages, rich source of nectar as they are. What lovely flowers of every mind I gather thence like a honey-bee….to their perusal I have devoted two hours a day.”

In 1524, Erasmus wrote a treatise in which he dealt with the Lutheran notion of the bondage of the will to sin. He systematically set out the weaknesses of Martin Luther’s Augustinian view in his De libero arbitrio diatribe sive collatio (The Freedom of the Will). In response, Luther wrote On the Bondage of the Will which directly attacks Erasmus, going so far as to claim that Erasmus was not a Christian.

Luther’s view was challenged by the Christian Humanist Erasmus and by others who believed that Luther's doctrine of total depravity robs humanity of the dignity that remains even after the Fall. That dignity comes from the image of God (Imago Dei) that cannot be completely erased from human nature.

During the Renaissance, humanism took various expressions. Some humanists, such as Erasmus, were deeply religious. These stressed the dignity of man and both heavenly and earthly rewards. Others were scoffers of religion. This secular humanism was a reaction against Church authority and against the bloodshed that resulted from religious conflict.

To Erasmus, the Bible and the Classics were two sides of the same coin, thus he strove to combine them. This is reflected in Erasmus’ definition of education: "The task of fashioning the young is made up of many parts, the first and consequently the most important part of which consists of implanting the seeds of piety in the tender heart; the second in instilling a love for, and thorough knowledge of, the liberal arts; the third in giving instructions in the duties of life; the fourth in training in good manners right from the very earliest years.”

To Erasmus, “a man without education has no humanity at all; that man’s life is a fleeting thing; that youth is an easy prey to sin; that adulthood is afflicted with numerous cares; and that old age, which few are permitted to reach, is barren and sterile...” He believed that the seeds for a good life are in us ‘by nature’, and teachers are to cultivate these seeds. He wrote: “The seeds that nature has implanted in us to attain this goal are bursting with life; the only thing that is required, in addition to this natural inclination, is the effort of a dedicated teacher.”

While Luther began his theology with the depravity of man, Erasmus started with the goodness of the teacher and the student, making Christ’s teachings the objective of all learning. To Erasmus, classical antiquity showed the best method for teaching. He wrote, “I would not want you to imbibe pagan morals together with pagan writings. On the other hand, you will find many things there which are conducive to a holy life, and the good precepts of a pagan author should not be rejected...” Luther held that since the Fall of Adam and Eve man’s will is not free to choose or even desire God, and that we lost our humanity. Luther believed that it is only through Christ that people regain their full humanity and he thought that Erasmus made too little of this point: “I am afraid, however, that he [Erasmus] does not advance the cause of Christ and the grace of God sufficiently.... Human things weight more with him than the divine.”

Erasmus's work has stood the test of time, and today he is recognized as a linguistic giant and one of the most erudite scholars of Western civilization.